You are here:
ARMY AND CITIZENSGENERAL STAFF 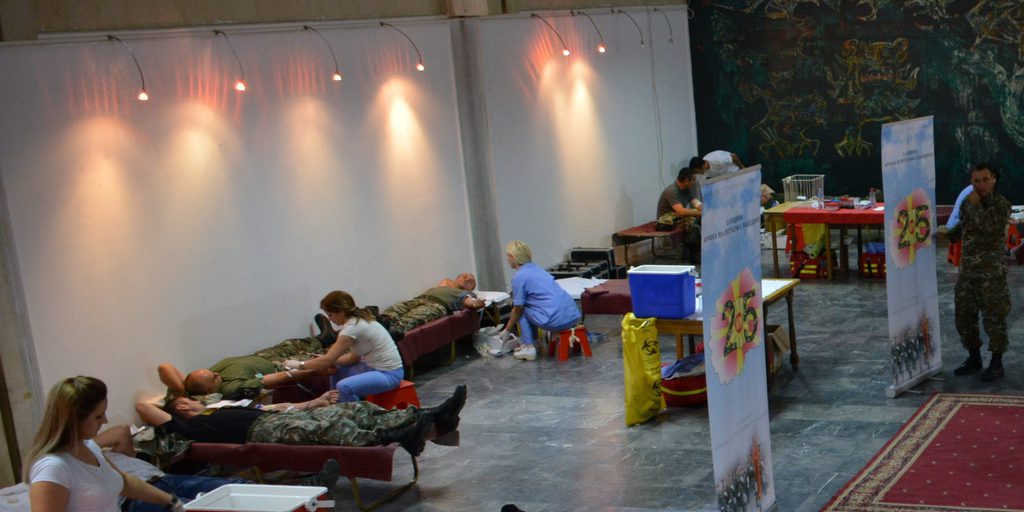 Members of ARM from the garrisons in Skopje, Veles and Petrovec as many times before voluntarily have joined the blood donation action, which has taken place at the House of ARM in Skopje today, as part of the planned activities for marking 25 years of the formation of the Army of the Republic of Macedonia.

The participants in today’s central blood donation action were visited by the Minister of Defence Radmila Shekerinska, CGS of ARM Lieutenant General Matodija Velichkovski and the Heads of the Red Cross of the Republic of Macedonia Mr. Sait Saiti and the Institute for Transfusion Medicine, Emilija Velkova.

On this occasion, the army members who have given blood more than 25 times and more than 50 times, were presented with certificates of appreciation and recognition, plaques and badges.

Today’s blood donation, which is expected to collect more than 250 blood units, confirms the humanity of the members of the Army of Republic of Macedonia, who are always ready to help where needed.

The Army of Republic of Macedonia in the period of 25 years in cooperation with the Red Cross of the Republic of Macedonia and the Institute for Transfusion Medicine have organized and realized blood donation actions at all commands and units on the occasions of days of units and the Day of ARM. On average, every year 15 – 20 actions of this kind are organized with approximately 800-900 regular blood donors, and their number is increasing continually.

From the beginning of this year, ARM has realized 18 blood donation actions gathering 768 blood units so far.