Marking the Day of the 2nd Infantry Battalion 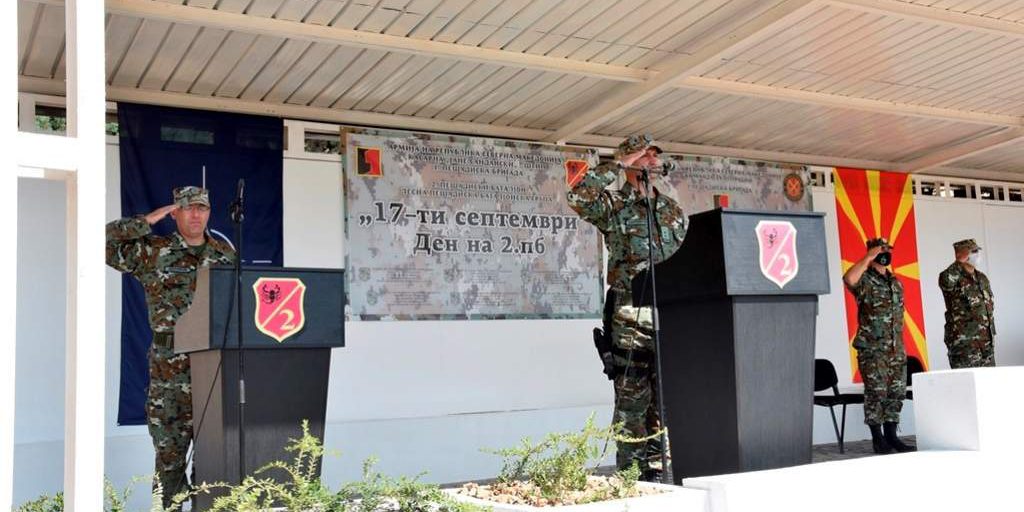 September 17, the Day of the 2nd Infantry Battalion (2nd IBn), within the 1st Infantry Brigade (1st IBde), was marked with a military ceremony in the barracks “Jane Sandanski” in Stip in accordance with the recommendations and measures for preventing the spreading of the “COVID-19” virus.

The ceremony was attended by the 1st IBde Commander, Colonel Besnik Emini with part of the personnel and staff of the Brigade and the Commanders of its subordinate units.

The Commander of the 2nd IBn, Lieutenant Colonel Stojanche Kostov addressed the members of the unit and the guests at the ceremony and he referred to the historic route of the 14th Macedonian Youth Liberation Strike Brigade “Dimitar Vlahov”, created in 1944 in the village Mitrashinci. The strength of this unit comes from the courage and honour of its members who serve the Army professionally and with dignity under the slogan HONOR AND STRENGTH. He also said, “Our unit, the 2nd IBn, as a base for the formation of the LIBG (Light Infantry Battalion Group), will continue towards new achievements by improving the level of readiness and interoperability with our NATO partners, we will continue on the way of achieving new and higher goals”.

The Commander of the 1st Infantry Brigade, Colonel Besnik Emini also addressed the audience and among other things he said, “I would like to congratulate you on this Day of the 2nd IBn and thank you for everything this unit has achieved until now, for the protection of the southern and northern border during the migrant crisis, for dealing with the COVID-19 pandemic, as well as for the completion of the tasks and missions abroad together with the other partners and NATO members”.

On the occasion of the Day of the unit, fresh flowers were laid at the commemoration landmark “Macedonia” in the barracks “Jane Sandanski” – Stip, in honour of the members of the 2nd MIBn who lost their lives in the 2001 conflict.

With a decree by the President of the Republic of North Macedonia and Supreme Commander of the Armed Forces, September 17 was declared as “Day of the 2nd IBn” in honour and remembrance of the traditions of the 14th Macedonian Youth Liberation Strike Brigade.