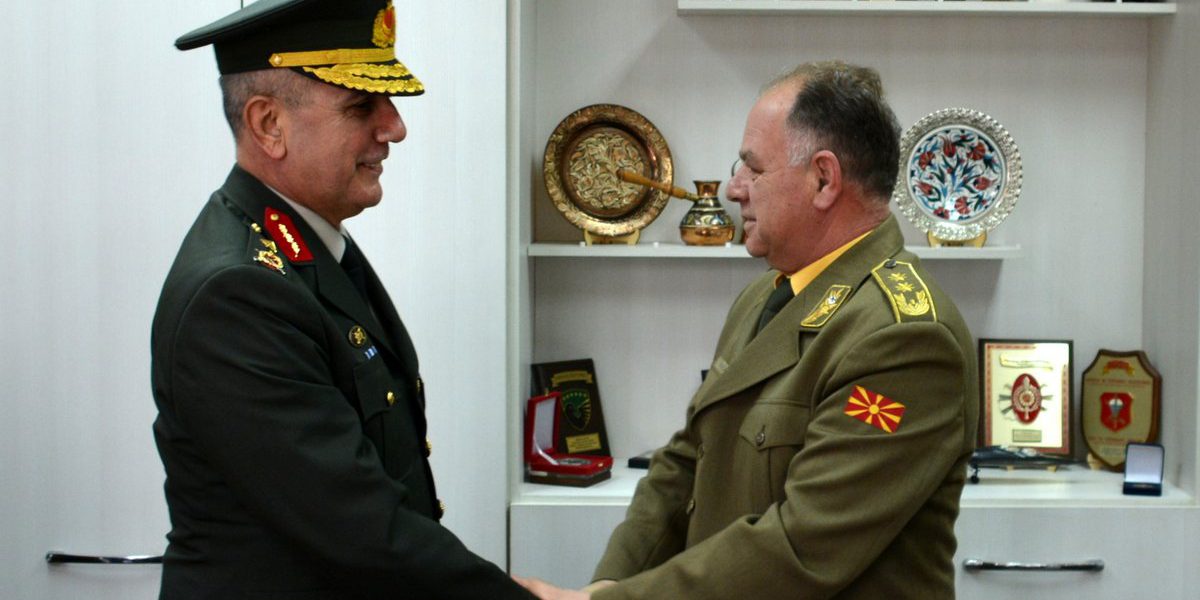 Turkish Armed Forces delegation is having a three-day visit of the Republic of Macedonia on the occasion of the anniversary of the graduation of Mustafa Kemal Ataturk at what used to be Military Gymnasium in Bitola.

Yesterday, the Deputy of CGS of ARM Major general Muhamed Racaj met the Turkish delegation at the General Staff of ARM. At the meeting, they talked about the bilateral cooperation between the Turkish Armed Forces and Macedonian Armed Forces and Turkish continuous support of Macedonia in its efforts of becoming a NATO member country.

The Head of the Turkish delegation, Brigadier General Nerim Bitlislioğlu pointed out many occasions of bilateral cooperation between the two armies which build the strategic partnership.

The Turkish Delegation consists of high ranking officers of the Turkish armed forces and cadets at the Turkish military schools. Today, they visited the Museum of Bitola which celebrated the anniversary of the graduation of Mustafa Kemal Ataturk at what used to be a Bitola Military Gymnasium.

General Muhamed Racaj mentioned in his speech that Turkey is the first country with which Macedonia signed a document for defense cooperation. Turkey is one of the biggest supporters of Macedonia, and the best proof of that is joint participation of ARM officers in the peacekeeping mission in Kabul within the Turkish contingent.

The Ambassador of Turkey to Macedonia, Tülin Erkal Kara and Brigadier General Nerim Bitlislioğlu thanked Macedonia for their warm welcome and excellent organization of the celebration on the occasion of the 119th anniversary of the graduation of Mustafa Kemal Ataturk at what used to be a Bitola Military Gymnasium. In their speeches, they said that this event constitute strong bridges of friendship between the two countries. In addition, they talked about the influence of the education Ataturk had in his formative years at he Bitola Gymnasium, to his military and state-building role in the process of shaping modern Republic of Turkey.

On the occasion of the 119th anniversary of this event, there was an official ceremony at the Museum of Bitola, i.e. at the memorial room of Ataturk. There were a lot of guests at the official ceremony, including Deputy Minister of Defense Bekim Maksuti, representatives of the Macedonian MoD and Chief of General Staff of ARM, Defense Attaches in the Republic of Macedonia, and etc.

Turkey, which was part of the founding of NATO, gives unconditional support to Macedonian aspirations to become a full NATO member nation.