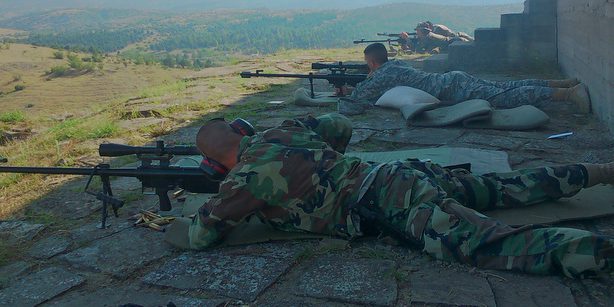 In the period from 07.08.2014 to 07.10.2014, the members of the Special Operations Regiment in cooperation with instructors from the Armed Forces of the United States on the terrain of “Krivolak” conducted advanced training for snipers.

This training is part of bilateral cooperation between the armed forces of the United States and the Macedonian Army. Instructor team from US was composed from members of the Marine Corps from the Black Sea rotational forces of the United States in Europe. The holder of the activity was Special Purpose Battalion. The course itself apart from the members of special purpose battalion was attended by members of the Ranger Battalion, the first mechanized infantry brigade and battalion of military police.

The purpose of training – merging technique and staff, detailed introduction to the techniques and procedures of this kind of specialty, in order to achieve maximum results and extracting maximum performance from the arms was fully achieved.

During training, several shooting trainings with various types of sniper rifles were executed. The results once again confirmed the high level of training and professionalism.