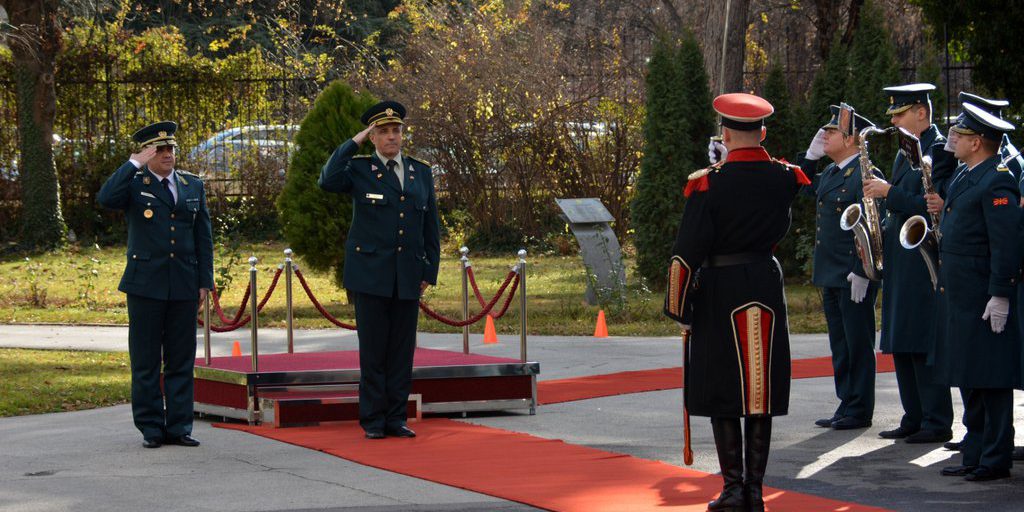 A delegation of the Montenegro Armed Forces, led by the Chief of the General Staff (CGS), Brigadier General, Dragutin Dakić, as part of the two-day official visit to Macedonia and the Army of Republic of Macedonia, had official meetings at the Ministry of Defence and the ARM GS today.

After the reception with high military honors and after meeting the CGS of the ARM, Major General Vasko Gjurchinovski, the CGS of the Montenegro Armed Forces, General Dakić, accompanied by the Montenegro Ambassador to Macedonia, H.E. Predrag Mitrović, had a meeting with the Minister of Defence, Radmila Shekerinska.

At the meeting, minister Shekerinska stressed the friendship and excellent bilateral cooperation with Montenegro in the aspect of defense, especially in military education and educating cadets from Montenegro at the military academy “Mihailo Apostolski”, she also expressed her belief in further strengthening of the mutual cooperation and thanked Montenegro for its support of Macedonia for the integration in NATO.

After the meetings, an official meeting was held which was attended by the ARM Deputy CGS, Major General Azim Nuredin, a delegation of the Montenegro army and part of the key personnel of the ARM General Staff.

During this meeting with the delegation, besides presenting the process of transformation of the ARM and its engagement in the UN, NATO and EU led peace support operations, the topics of discussion were the experiences from the integrative processes of Montenegro after its full-fledged NATO membership, as well as further bilateral military cooperation.

At the talks, General Gjurchinovski, besides other matters pointed out the importance of the meetings, above all in the aspect of exchange of experiences and setting the modules for intensifying the cooperation with Montenegro, which shares its experience, as the youngest NATO member state, in the process of full integration of Republic of Macedonia in the alliance.

Confirmation of genuine and friendly cooperation was also highlighted by General Dakić, who said that Montenegro as a NATO member state openly shares the experience from the process of transformation and the beginnings of the full-fledged membership in the alliance. Again he repeated the mutual cooperation in military education and in the aspect of military training, above all in military Air Force, looking into the possibilities to expand it through realization of joint trainings and use of the facilities of the Training Area ‘Krivolak’.

As part of their visit, the Montenegro military delegation visited the military barracks ‘Ilinden’ where they attended a presentation by the Special Operations Regiment (SOR), and military demonstration exercises where members of the SOR displayed their training and readiness.