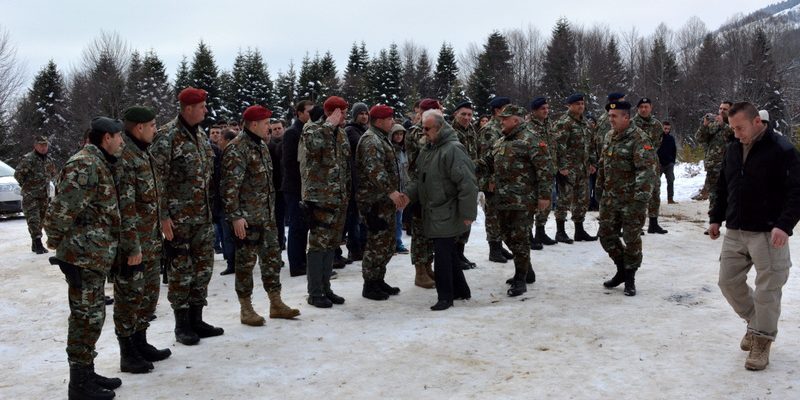 Today, 4th February 2014, the Ministry of Defense Talat Xhaferi, accompanied by the Deputy of the Chief of GS of the ARM, Lieutenant-General Naser Sejdini and the State Secretary at the MoD Sasho Stefanoski, visited the members of the Special Operations Regiment (SOR) of the ARM, who demonstrated training in winter conditions at a locality near the regional road Mavrovo-Rostushe.

“Here, we were once again assured of the special operations regiment’s capability. I can say that they are well trained and can perform activities in very complex conditions”, pointed out Minister Xhaferi during his visit. The Minister also added that what was shown corresponds to the unit’s status.

In respect of equipping, Minister Xhaferi added that there is a procurement plan and according to financial capacities the regiment members will receive the best equipment.

Special Operations Regiment Commander, Brigadier General Vasko Gjurchinovski informed that with today’s experimental exercise, the regiment starts its activities in celebrating the anniversary “20 years of special units in the Arm”. He also stated that on 19th February, all citizens of Republic of Macedonia who are interested, will have the opportunity to visit the Open day of the Unit at the military barracks “Ilinden”, and reminded that the central anniversary ceremony and the unit’s day will be held on the 1st March.

The SOR members carried out an experimental tactical exercise in snow and a tactical march on skis with shooting, during which they presented the equipment as well as the mountain accommodation and living facilities in winter conditions, once again confirming their high level of training and abilities in carrying out tasks in complex terrain and weather conditions.