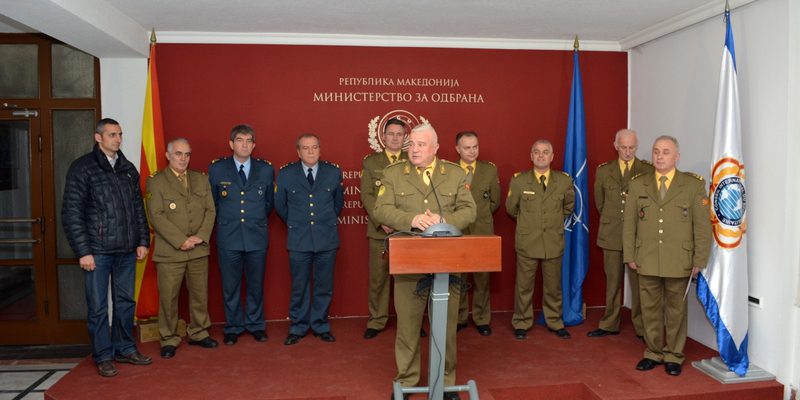 Today, 3rd of February 2014, at the premises of the Ministry of Defense (MoD) and the General Staff (GS) of the ARM a ceremony for declaration of the best athletes in the MoD and the ARM of year 2013 was held.

The awards and medals for best athletes in the MoD/ ARM for year 2013 were presented by the Deputy of the Chief of GS of the ARM Lieutenant-General Naser Sejdini. Professional soldier Darko Damjanovski was declared best athlete in the MoD/ARM for year 2013 in the men’s competition, for his achievements in Nordic skiing – Biathlon, and in the women’s competition, Blagica Dimitrova, a cadet at the Military Academy “Mihailo Apostolski”, who in the past year showed high scores in athletics competitions.

At the ceremony, pointing out the significance of sport and physical training for the ARM, General Sejdini stressed that sport is an inseparable part of military life and profession, and that its application directly influences not only the health but also the combat readiness of the ARM. He reminded that sport is compulsory and routine obligation of each member of the ARM, which is why the regular physical test results have considerable influence on professional development of the active military personnel of the ARM. The Deputy of the Chief of GS of the ARM took the opportunity to thank all the ARM members who participated in the sport events in 2013, especially at international level, where they greatly contributed to the affirmation not only of the ARM but the country.

Presenting the award to professional soldier Damjanovski, General Sejdini, in the name of the ARM members, wished him success and good placement at the upcoming Winter Olympic Games in Sochi.

Declaration of the best athlete in the Mod and the ARM is realized by the International Committee of military sports and is a great incentive and motive for achieving top scores by the MoD and ARM members in sport, and it is to become a tradition.