Marking of the patronage of the barracks in Petrovec and Prilep 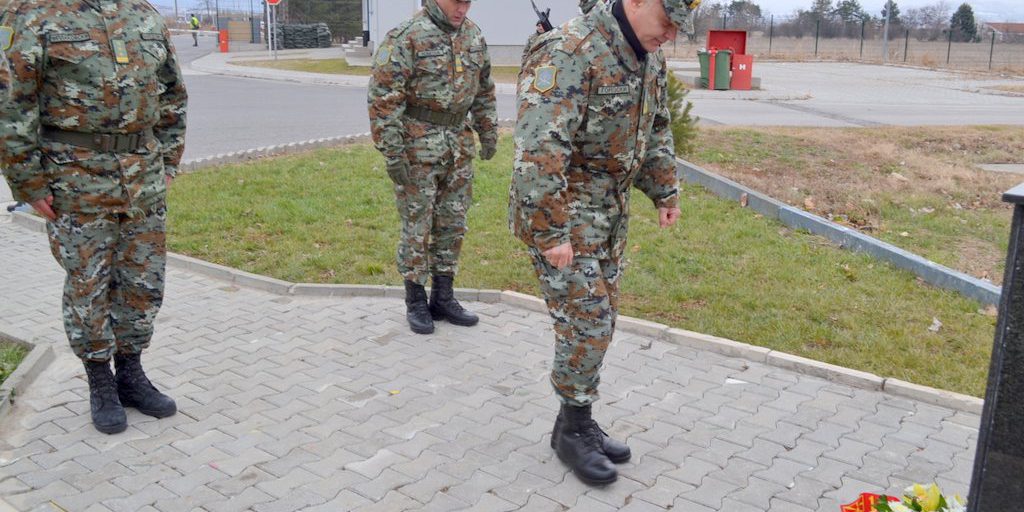 Today, in the barracks “Straso Pindjur” in Petrovec and “Mirche Acev” in Prilep, patronage and the 76th anniversary of the death of the national heroes Strasho Pindjur and Mirche Acev were marked by laying fresh flowers.
Delegations from the Joint Operations Command, the Command of the 1st Mechanize Infantry Brigade, the Command of the Air Brigade, the representatives of the Municipality of Kavadarci and the Museum of Kavadarci, the Republic of Macedonia NOB Association and the City Skopje laid fresh flowers in the barracks in Petrovec. In the barracks in Prilep fresh flowers were laid by delegations from the 1st Mechanized Infantry Brigade led by Colonel Besnik Emini, the Artillery Battalion, the Municipality of Prilep and the NOB Association from Prilep.

History classes for the lives and deeds of national heroes Strasho Pindjur and Mirche Acev were held at the barracks.

A representative of the Museum of Kavadarci, historian Marija Mihova spoke about the life and work of Strasho Pindjur in front of the personnel of the barracks Petrovec and the other quests. The Commander of the 1st Mechanized Infantry Brigade and the Garrison Petrovec the Brigadier Mirche Gjorgoski addressed the audience and emphasized that the celebration of the patronage strengthens the connection of today with the rich history of the Macedonian people and that the ARM members are obliged to respect the works and the lives of all fighters for free and independent Macedonia.

At the celebration of the patronage of the barracks in Prilep Lieutenant Colonel Gjorgji Vasilevski addressed the participants and spoke about the life and work of the national hero Mirche Acev, and the students from the high school “Mirche Acev” from Prilep participated in the cultural and artistic program.