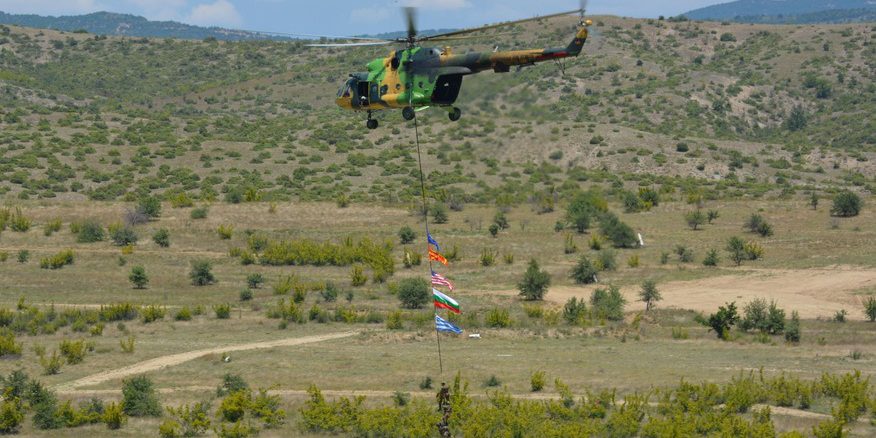 Today was realized the Distinguished Visitors Day within the “Decisive Strike 21” exercise, which started on May 17 and lasts to June 2, at the “Krivolak” Army Training Area.

In the hierarchy of the massive training activities of the “Defender Europe” exercise which are conducted on the European continent under the auspices of the USA Army for Europe and Africa in which participate armies form the NATO nations and nations members to the peace partnership, the “Decisive Strike” exercise is its integral part and also it is the biggest national exercise organized by Republic of North Macedonia after the full membership in NATO. The commander of the Joint Operations Command, Major General Pavle Arsovski, in his address stated that it presented a great honor, responsibility and trust to be part of the “Defender Europe” which this year included 27 armies with 28000 soldiers in 16 countries in South East Europe, host nations among which Republic of North Macedonia.

Brigadier Jed Schaertl, deputy commanding general for Mobilization of the AF of USA for Europa and Africa, expressed his pleasure for his presence at Krivolak and for the opportunity to see in person, as he said, the impressive opportunity for real training and practice on this training area.

Brigadier Schaertl said that this first big exercise after the full membership of North Macedonia in NATO, showed the dedication of Alliance nations and that with this kind of exercises we learn about each other, we learn about the equipment and the systems, so we can really be interoperable and support each other.

The minister of Defense, Radmila Shekerinska, noted that in the past two weeks, the infantry units and the special forces units of the armies of North Macedonia, USA, Greece and Bulgaria showed that they can operate as one, that they are the power of NATO, that the Macedonian soldier in action can trust with his life to the American, the Bulgarian or the Greek soldier, or to defend the lives of their allies while the action is in progress. The minister congratulated to the army team for the flawless organization and expressed gratitude to the USA for the long and continuous support in strengthening the abilities and the interoperability of the army.

The prime minister Zaev said that he was proud of the members of the Army, of the officers and the soldiers for the desire for perfection and promotion. “They fulfill all duties and expectations with dignity and on a very high level together with our allies not just at home but also with the participation in the international missions which guarantee world peace. With the membership in NATO we are not alone anymore. North Macedonia never again will be questioned nor isolated from the world” stated the prime minister. He also added that with the membership in the Alliance, this country became stability factor and security exporter.

The president of North Macedonia and supreme commander of the army, Stevo Pendarovski, congratulated to all participants and stressed that they had excellent opportunity to check the interoperability with several NATO nations showing capacity and ability to plan and organize big exercises together with the other allied armies. Besides being a confirmation in military sense of the capacities for management of integrated and inter-branch operations this exercise is very significant for strengthening the transatlantic partnership consequently the security of Europe and West Balkans.

“With joint planning and organization of exercise of this level, North Macedonia and the USA affirm the old strategic partnership. Besides that, there is another regionally very important dimension in “Decisive Strike” where except members of the USA Army also participate representatives from the armies of Bulgaria and Greece with which we strengthen the bilateral partnership with these two neighbors and simultaneously we intensify the regional cooperation in the area of defense and security” stated the president in his address.

The distinguished visitors’ day was attended by The President of Republic of North Macedonia and Supreme Commander, Stevo Pendarovski, The President of the Assembly, Talat Xhaferi, The President of the Government Zoran Zaev, The Minister of Defense Radmila Shekerinska, The ministers in the Government Oliver Spasovski, Venko Filipche and Fatmir Besimi, Minister of Defense of Monter Negro Olivera Injac, The Chief of general Staff Lieutenant General Vasko Gjurchinovski, the ambassadors of the USA, Kate Marie Byrns, the ambassador of Greece Roussos Koundouros, the ambassador of Albania Fatos Reka, representatives frm the assembly committee of defense and security, distinguished military and civil representatives of the AF the ministries of defense of the USA, Bulgaria, Greece and NATO, the commander of SEEBRIG Aristeidis Iliopoulos, the commander of the Bulgarian special forces Major General Javor Mateev, the commander of the National Guard of Vermont Brigadier Gregory Knight, as well as defense attachés accredited in this country.

The “Decisive Strike 21” exercise is part of the biggest NATO exercise which this year takes place in Europe, “Defender Europe 21”. In “Decisive Strike 21” participate 1500 of the AF of 4 NATO nations – North Macedonia, USA, Greece and Bulgaria. The fundament of the exercise is demonstration of high level of interoperability, combat readiness and integration in NATO procedures of the declared light infantry battalion with the allies as well as integration of the conventional and special forces.

On the distinguished visitors’ day were presented offensive operations and activities of the infantry and special forces of the armies of North Macedonia, the USA, Greece and Bulgaria, supported by helicopters from the air brigade and F16 air planes from the AF of Greece.

Also, the host of the exercise, showed that it has experience and capacity to organize big and complex exercises, on a training area which owns all necessary conditions for performance of this type of field exercises.