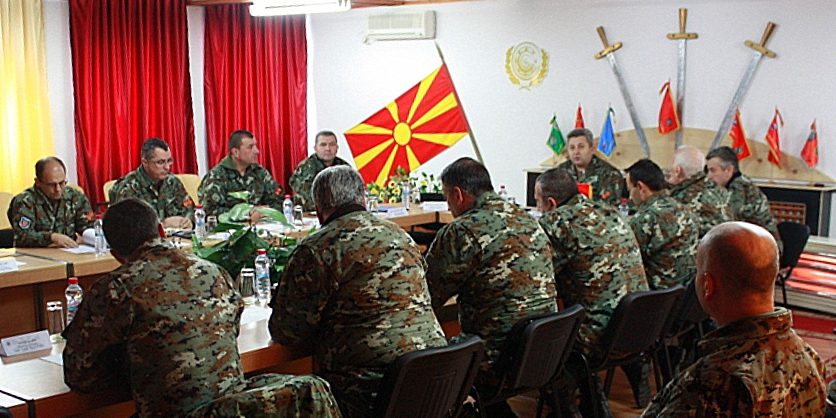 At the Joint Operations Command in the military barracks ‘Boro Menkov’ in Kumanovo, an annual briefing on the combat readiness in year 2016 was delivered by the commanders of commands and units subordinate to the ARM General Staff.

Commanders of subordinate commands and units briefed the Chief of General Staff of the ARM on the achievements, realized plans, training and other segments of the units’ duties which influence their combat readiness.

Observations and analysis by commanders of subordinate units on: personnel management, protection of forces, operations, training and exercise, logistic support, liaison, budgeting and civil-military relations, were delivered at the briefing on combat readiness for year 2016. The participants pointed out the level of completion of the planned tasks, results achieved in training, satisfaction with the living and working conditions, as well as experiences and lessons learned from participating in peacekeeping missions.

Among other things, an overview was given of the engagement of ARM units in carrying out the given tasks to secure the South border, while dealing with the migrant crisis, as well as, engagement of necessary human and material resources in support of other state institutions in relieving the consequences of the disastrous floods which struck the Skopje region.

Special emphasis in the briefing was put on logistic support and financial securing of the commands and units, and their overall influence on the combat readiness. In the end, General Velichkovski concluded that with maximum engagement of all subjects, the level of completion of the main tasks and projects which marked the previous year is on a necessary level, and he issued tasks and gave directions for realization of the planned duties for year 2017.