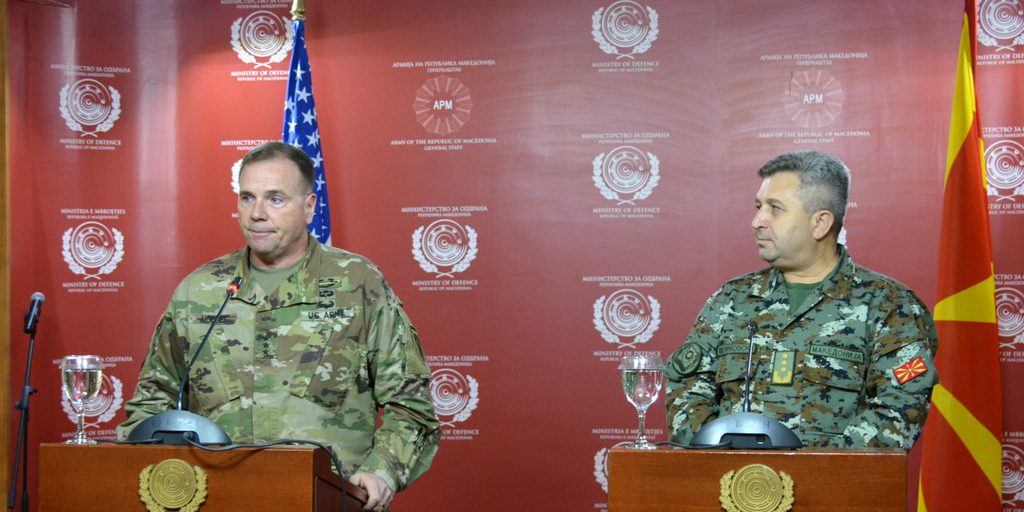 The Commander of Land Forces of the United States of America for Europe, Lieutenant General Frederick Ben Hodges, who is on his first official visit in Macedonia and ARM, visited the General Staff today.

During today’s meeting at the General Staff, the Chief of GS Lieutenant General Metodija Velichkovski expressed his appreciation for the comprehensive support of the Army Command of the United States Armed Forces to strengthen the defense capabilities and raise ARM readiness by supporting the participation of ARM in exercise activities and the implementation of defense projects of regional significance with emphasis on the Balkans medical Task force. The Command of the US Armed Forces provided ARM with logistics support for its participation at the multinational exercise ‘Anaconda-16′ where 157 ARM servicemen were able to prove the interoperability with other NATO armies.

Among other things discussed during the official talks were the facilities that ARM can offer for training as well as ARM joint participation in international exercises with the representatives of the US Land Forces for Europe in 2017.

ARM Chief of Staff informed the media that the capacities, capabilities and achievements of ARM participants at Anaconda -16’ exercise were highly praised by the US army which gives us the right to conclude that we are on the right track to become NATO member country.

Addressing media representatives General Hodges stated that he was impressed by the enthusiasm of the cadets at the Military Academy. Yesterday he spoke with the cadets and offered a full support for the development of this institution. He also stressed the commitment of ARM and MoD to move towards Euro-Atlantic integration, where Macedonia’s membership would contribute to increasing the security and stability in Europe and the region.

During his stay in the General Staff of ARM, General Hodges also met Minister of Defence Zoran Jolevski.

General Hodges’s visit to ARM capped by visiting Military Police Battalion where the structure, tasks and the available equipment of the unit were presented.