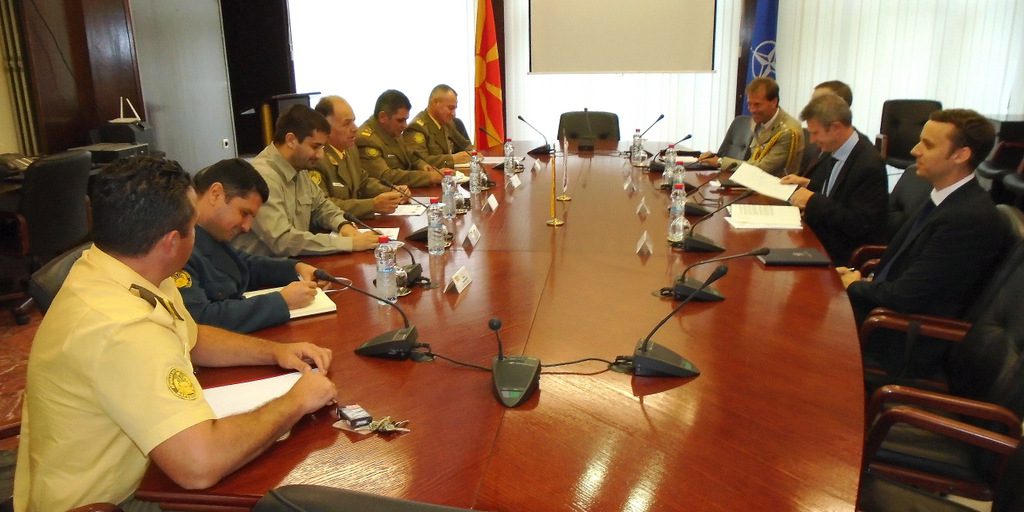 At the ARM General Staff, Deputy Chief of General Staff of the ARM, Major General Muhamet Racaj held a meeting with Mr. Nick Gurr, United Kingdom (UK) Ministry of Defense (MoD) Director for International Security Policy, who is on a one-day official visit to the Republic of Macedonia.

At the meeting many issues related to the possibilities for strengthening the partnership between the UK Armed Forces and the Army of the Republic of Macedonia were discussed, especially during the current period of terrorist threats and the migrant crisis.

General Racaj pointed out the importance of the support the ARM receives from this partner country in many areas, especially in the area of military education and joint trainings, and participation in international peacekeeping missions.

During his stay at the MoD and the GS of the ARM, this high representative of the UK MoD also had a meeting with the Minister of Defense of Republic of Macedonia, Mr. Zoran Jolevski.

Previously, Director Gurr paid visit to the Joint Operations Command (JOC) in Kumanovo, where after his meeting with Deputy Commander of the JOC, Brigadier General Pavle Arsoski, the command held a briefing.

At the briefing Mr. Gurr was familiarized with the mission, tasks and structure of the JOC, as well as with the engagement of its units in the peacekeeping missions, and the activities the ARM undertook in the foregoing period in dealing with the challenges of the migrant crisis and the consequences from the flood.

Continuous meetings with representatives from the partner countries are significant for the support of the integration process of Republic of Macedonia to the North-Atlantic family.