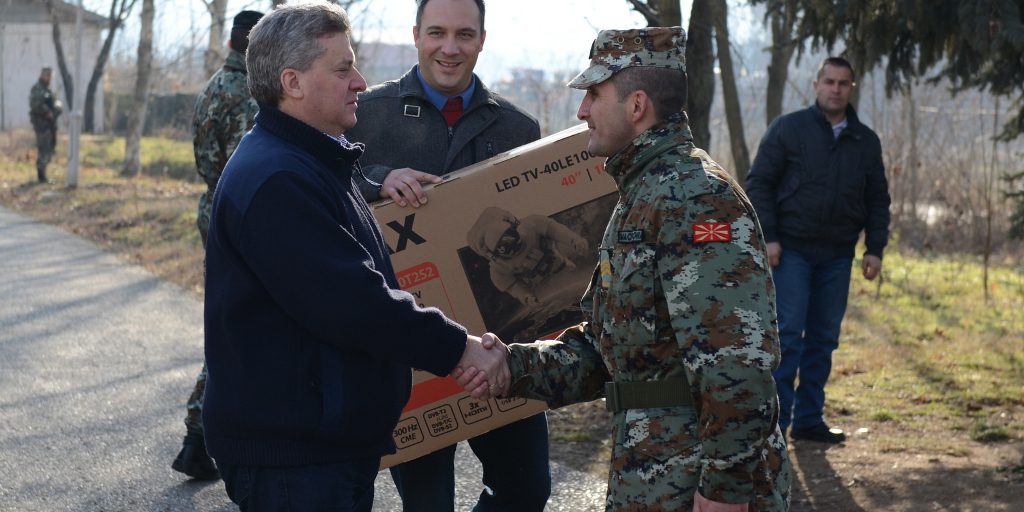 Macedonian President and Supreme Commander of Armed Forces, HE Dr. Gjorge Ivanov, on the first day of the New Year paid a traditional visit to the ARM members who performed their duties during the New Year holidays.

This year President Ivanov visited the army warehouse “Erebino”, and accompanied by the ARM Chief of Staff, Lieutenant General Metodija Velichkovski, congratulated the New 2017 to the ARM members.

President Ivanov congratulated the New Year to the ARM members who were on duty during the holidays, and thanked them for enabling the citizens of Macedonia to spend the holidays in peace and harmony.

In the press release President Ivanov wished ARM members to continue carrying out their professional responsibilities, as they did before. In addition, the President congratulated the New Year to the ARM members who are currently in peacekeeping missions abroad, stating that they are Macedonian pride, and that they promote Macedonia abroad.

He thanked the Army for their endeavours, such as ensuring the border in dealing with illegal migration, but also for the help in alleviating the effects of the natural disasters that occurred last year in Skopje region.

During the visit, after familiarization with the tasks in the warehouse “Erebino”, the President awarded a TV set to the ARM members, and then had lunch together.