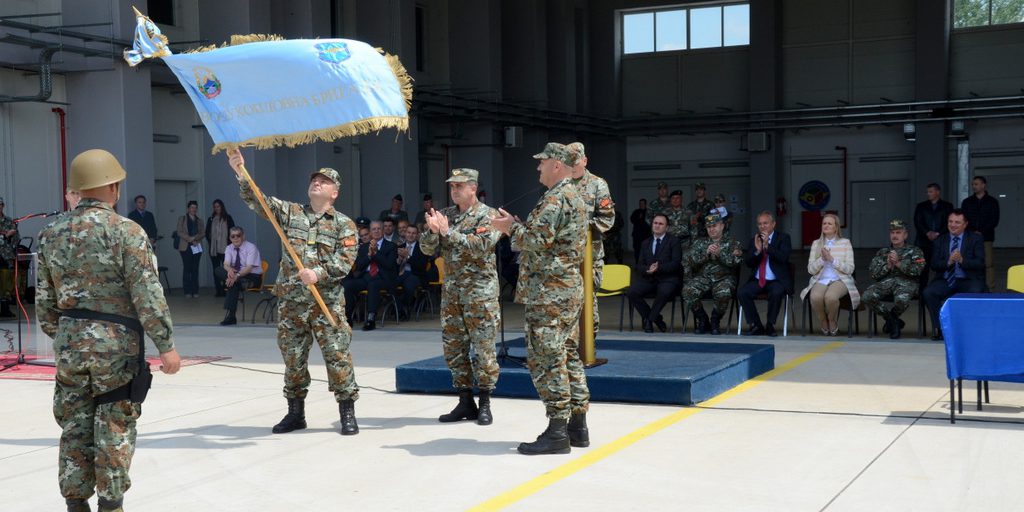 Colonel Kire Kolevski who had been head of the unit since 2008 handed over commanding of AF Brig to Colonel Robert Malezanski, who has performed the duties of deputy commander of the AF Brig.

The ceremony was attended by Defence Minister Dr. Zoran Jolevski, Chief of Staff Lt Gen Metodija Velickovski, generals of the Army, senior officials from the Ministry of Defence and General Staff, commanders of ARM units, representatives of local governments and organizations that cooperate with this unit.

Commander of JOC Major General Vasco Gjurchinovski, the former and the newly appointed commander addressed the audience at the ceremony.

In his address, General Gjurchinovski thanked the outgoing commander Colonel Kire Kolevski for his commitment and participation in developing the Air Force in a highly professional and prestigious component of the army. He congratulated the newly appointed commander Colonel Robert Malezanski on his new appointment and wished him successful lead of the unit.

Colonel Kire Kolevski expressed special thanks to the unit for the support which he had as a commander for the past 8 years.

In his speech the newly appointed commander of AF Brig. Colonel Robert Malezanski stressed that he will carry out the new duty professionally and responsibly as his predecessor and that he would give the maximum for the unit.

Pursuant to military protocol after the order for appointment was read the flag of the unit was taken over by the newly appointed commander of AF Brig.