Handover of the Duty Sergeant Major of the Army 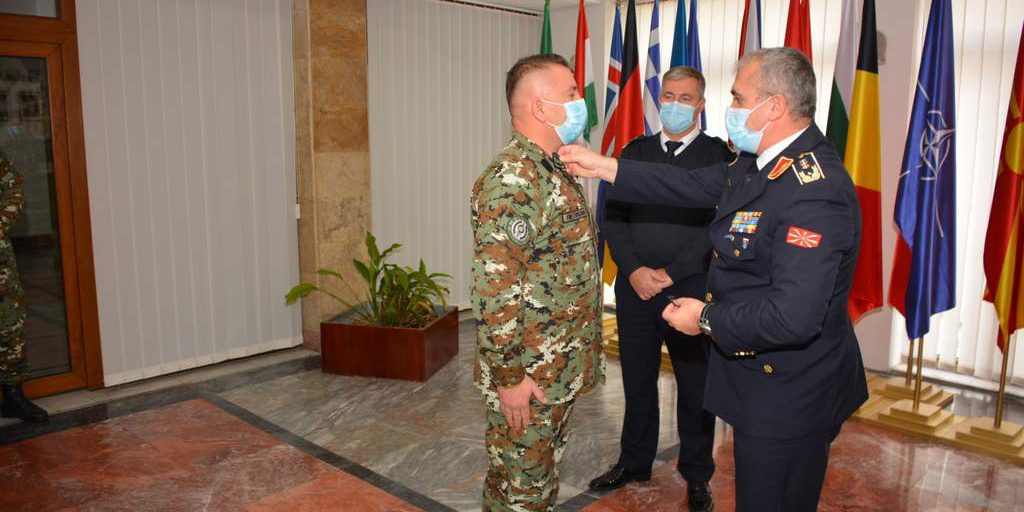 By presenting the unique badge of the Sergeant Major of the Army by the Chief of General Staff, the handover of the highest NCO duty was officially carried out.

General Gjurchinovski, emphasizing the significance of the Sergeants Major in the Army, presented the current activities that refer to filling up NCO positions, as well as the efforts made by the highest military management at the General Staff for complete implementation of the NCO concept, at the same time placing the NCO role at the projected position, according to the NATO standards.

The expectations of the NCO Corps and the Sergeants Major, as holders of this process, with maximum effort and investment of their entire potential will achieve the set goals of the concept and make their contribution for carrying out of any part of the missions that lay ahead of us, were expressed by Generals Nuredini and Mileski.

Sergeant Major Petreski emphasized that he will make maximum effort and with the support of the superiors, as well as the Sergeants Major will continue to realize the set goals in the integrative processes in the domain of the NCO Corps of the Army.

Sergeant Major Cvetkovski, who has performed this duty in the last five years, stressed that the duty of the Sergeant Major of the Army is a privilege, but at the same time a great responsibility, expressed his gratitude to all of the closest collaborators and all the servicemen of the General Staff for their cooperation.

Sergeant Major Brane Petreski in his career so far has served as Sergeant Major at tactical and operational level, and has completed the NCO Academy in the USA.

The NCO Corps in the NATO armies is especially significant and presents one of the main pillars in conducting the military training. NCOs are leaders of their units and the most responsible individuals for the training and facilitate more efficient functioning of command in the units. To be appointed to the post of Sergeant Major, an NCO must complete the NCO Academy in NATO partnership Armies and to have full legitimacy and expertise to be the one who will forward the information.