Promotion of 13th Class of cadets from the Military Academy “gen. Mihailo Apostolski” 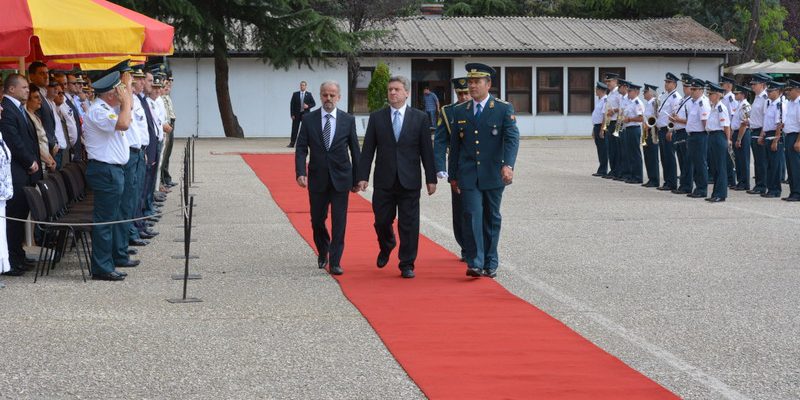 Today, July 31th 2013, 34 cadets from the 13th Class were promoted into a rank of second lieutenant and future officers. This class is the first to graduate from the Military Academy “gen. Mihailo Apostolski”, after it was restarted in the year of 2009.

The ceremony was attended by the President and Supreme Commander of the Army of the Republic of Macedonia, Dr. Gjorgje Ivanov, the Minister of Defense Mr. Thalat Djaferi, the Chief of the General staff of the ARM Major-General Gorancho Koteski, the Deputy Minister of Defense Mr. Emil Dimitriev, representatives from the diplomatic corps, as well as numerous guests and relatives to the promoted second lieutenants.

The NATO standards in the education of the members of the Military Academy were noted by the Minister of Defense, Thalat Djaferi. Among the rest, he said that the Military Academy is the only military institution for high education and science in the Republic of Macedonia that has a task to educate, train and perfect officers and civilians for the needs of the Army of the Republic of Macedonia, the Ministry of Defense, the Directorate for Protection and Rescue and the Crisis Management Center.

“This day of promotion is an ARM holiday because the young lieutenants are our new force” – stated the Chief of the General staff, Major-General Gorancho Koteski. The Chief of the General staff in his address to the freshly promoted lieutenants said that they should be proud to be a part of the institution that enjoys the highest rating in Republic of Macedonia, the institution that has success not only in the country, but thousands of kilometers outside its borders. “These are moments fulfilled with strong emotions, but the moment when you step in front of soldiers as officers of the ARM, will mean more than emotions, it will be a start of your military careers as officers of the ARM” – said Koteski.

The Ceremony ended with the traditional tossing of the hats by the promoted lieutenants. Let’s all of us wish them success in their professional career.