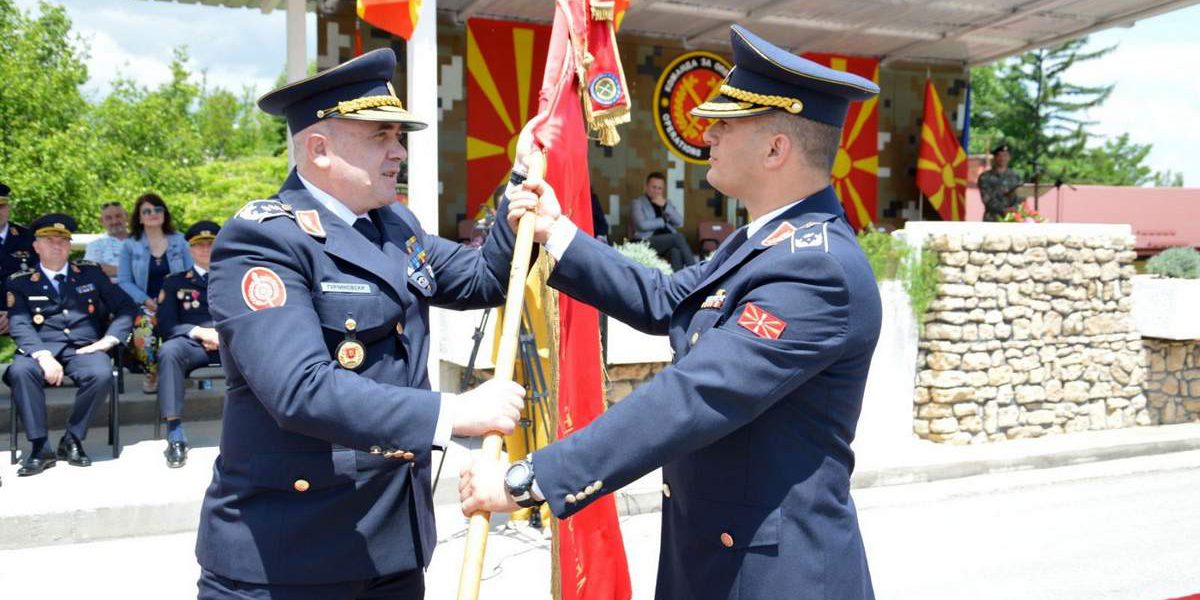 The President of the Republic of North Macedonia and the Supreme Commander of the Army, Stevo Pendarovski, issued a Decree to appoint Commanders of the Operations Command (OC) and the First Infantry Brigade (1IBde), therefore, there was an official duty handover ceremony of these two appointments today.

At the military barracks “Boro Menkov” in Kumanovo, pursuant to Army Protocol Regulation, there was a military ceremony when the flag changed hands, following the handover of duties between the outgoing Commander of OC, Major General Pavle Arsoski and the incoming Commander, Brigadier General Besnik Emini.

Brigadier General Emini was Commander of the 1IBde, and now he is going to lead the largest Operations Command in the Army of the Republic of North Macedonia, whereas, Major General Pavle Arsoski has been OC Commander since May 2018, and now he has been appointed as assistant to the Chief of General Staff concerning combat readiness and operations.

Service personnel of the subordinate units lined up at the handover ceremony, when the Chief of General Staff, Lieutenant General Vasko Gjurchinovski, and the outgoing and the incoming Commanders of OC addressed them.

General Gjurchinovski expressed his gratitude to General Arsoski for his contribution, excellent leadership, dedication and professionalism demonstrated while performing his duties at this Command, and encouraged him to utilize his knowledge and experience in his new appointment.

In addition, he wished General Emini success in his future command duties, expecting him to follow already paved path and achieving success of which the Army will be proud. General Emini previously performed the duties of Chief of Staff in OC. At the end, General Gjurchinovski expressed his gratitude to all service personnel of the Operations Command for their dedicated work in the last period while dealing with the worldwide pandemics, migration crisis and transformational processes.

In his address, General Arsoski said that OC and its subordinate commands is exceptionally compact, effective and efficient unit with established high work standards. He reported that all challenges in the last period were overcome and all tasks were completed including conducted military exercises and dynamic training. Finally, he recommended to the OC service personnel to support the newly appointed Commander and continue working successfully.

The newly appointed Commander Emini addressed the audience saying that his obligations and tasks will be his priority while being on this appointment in the following period, which includes the transformational process and building up capabilities. For him, being dedicated and consistent is the right way to achieve defined objectives and to accomplish desired combat readiness.

Brigadier General Besnik Emini, has performed many command and staff duties including Rangers Battalion Commander, Chief of Staff of OC, and Commander of 1IBde, which has been his previous appointment since 2019.

At the handover ceremony, the Commander of the Operations Command, Major General Pavle Arsoski, and the Commander of 1IBde at the time, Brigadier General Besnik Emini, and its newly appointed Commander, Colonel Sashko Lafchiski addressed the audience.
Major General Pavle Arsoski told Brigadier General Emini that his experience leading the 1st Infantry Brigade will help him wisely and successfully lead current and upcoming transformational processes, while Colonel Lafchiski, who is coming from the Special Forces, will lead the 1IBde to achieve new success and results.

Brigadier General Besnik Emini thanked all service personnel for their dedication for successfully performed tasks, and that he will implement his three-year successful leadership experience in his new appointment.

Colonel Lafchiski congratulated the service personnel on the successful military exercise “Decisive Strike 21” and thanked his predecessor for the paved path, which will help him in his successful work when facing the next challenge of the First Infantry Brigade, which is evaluation of the First Infantry Battalion, expecting support from all commanding structures in achieving of this objective.

At the today’s ceremony, beside the Chief of General Staff, Lieutenant General Vasko Gjurchinovski, there were other guests including Deputy Minister of Defense, Bashkim Hasani, Deputy Chief of General Staff of the Army, Major General Azim Nuredin, State Secretary at the MoD, Dragan Nikolikj, generals in the army, representatives from the President’s Cabinet, Ministry of Defense and the General Staff of the Army, former commanders and current commanders of the subordinate units.

The Operations Command is the largest command at operational level whose mission is preparation of conventional land forces and air support of the Army to defend and protect the territorial integrity and independence of our country. Its declared units participate in peace support operations, and thus contribute to wider interests of the Republic of North Macedonia.

The First Infantry Brigade is the largest unit of the Army, which is recognized for its experience in peace support operations, a large number of military exercises, high results in NATO evaluation of its units, dealing with challenges during the migration crisis and assistance to state institutions while dealing with the pandemics caused by the virus Covid-19.