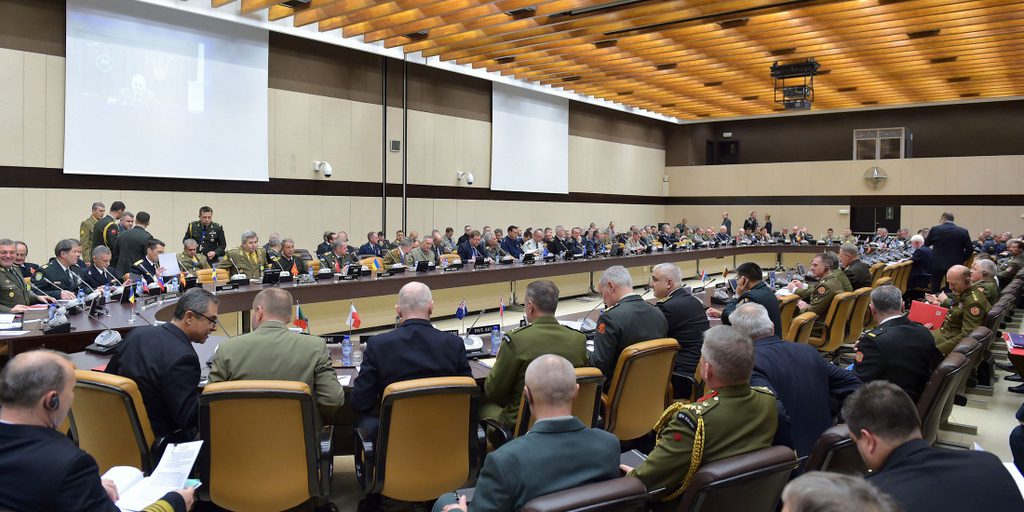 Today, the Chief of the ARM General Staff, Lieutenant General Metodija Velichkovski, attended the NATO Military Committee (MC) meeting at the level of Chiefs of Defence of NATO member states and countries participants in the mission ‘Resolute Support’ in Afghanistan, which is held at the NATO Headquarters in Brussels.

In the session on the mission ‘Resolute Support’ in Afghanistan, the ARM Chief of GS addressed the meeting. Latest information on the current status and security conditions in Afghanistan were presented, as well as the plans for mission accomplishment in order to provide guidance and direction for further action, which are to be considered at the Ministers meeting scheduled for February.

In his address, General Velichkovski pointed out the full support given to the efforts for further development of Afghanistan, which can be seen from the previous participation of the Army of the Republic of Macedonia. It has continually taken part in the ISAF mission from the very beginning, and during that period more than 3 000 members of the ARM have participated in the mission.

General Velichkovski also presented the current participation of the ARM in the mission, as a partner army with 39 members who are performing responsible roles in carrying out their tasks in the mission for assistance, advice and training, as well as the role to secure the mission’s head quarters in Kabul.

During this session, which considered the partnership with NATO, the regional security conditions and recommendations for intensifying the mutual military cooperation, General Velichkovski in his address stressed the determination and accomplishment of ARM plans for full NATO membership.

The NATO Permanent Representatives actively participated in the meetings. Republic of Macedonia also has its high military representative in the NATO Command.

Among other things, during these separate sessions the Chiefs of General Staffs discussed issues on NATO structure’s functionality, strategies for strengthening the defense capabilities, implementation of initiatives for accomplishing stability, as well as future plans for the mission ‘Resolute Support’.

The NATO Military Committee which meets twice a year, at the level of Chiefs of Defence, has an important role in providing consensus-based military advice on how the Alliance can best meet global security challenges.