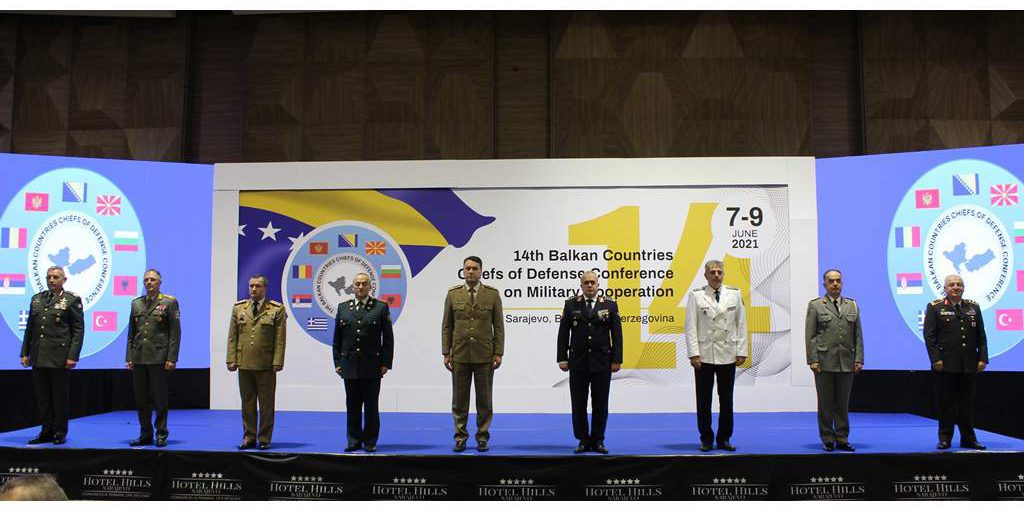 The Chief of the General Staff (CHOGS) of the Army, Lieutenant General Vasko Gjurchinovski, took part in the 14th conference of Chiefs of Defense/General Staffs of the Balkan countries (B-9 Forum) held in Sarajevo, Bosnia and Herzegovina.

The main topic of the conference was “Integration, Cooperation and Partnership: Factors of regional and global stability and security – perspectives, challenges and the response to COVID-19”. The participants also discussed this year’s reports of the sub-working groups for asymmetric threats, military education, training and coordination.

General Gjurchinovski at the discussion sessions talked about the importance of this Forum, which as one of the main pillars of the mutual military cooperation plays a major role for the regional security. Concerning the COVID-19 challenges we have faced so far, he emphasized the importance of the continuing and strengthening the multinational cooperation and support as well as improving them.

In accordance with the program of the 14th conference, the Balkan Chiefs of Defence/General Staffs signed a joint statement confirming the intentions for expanding and strengthening the military cooperation.

At the conference, General Gjurchinovski had bilateral meetings with some of his colleagues during which they discussed ways of enhancing the mutual military cooperation.

The participants at the conference, beside the host of the B-9 Forum, the Chief of the Joint Staff of the Armed Forces of Bosnia and Herzegovina General Senad Mashovikj, were the Chiefs of the General Staffs of the member countries: the Republic of North Macedonia, Albania, Bulgaria, Greece, Bosnia and Herzegovina, Serbia, Turkey and Montenegro, as well as Croatia and Slovenia, as observer countries. Special guests at the conference were the Chairman of the NATO Military Committee, Air Chief Marshal Sir Steward Peach and the high-ranking representatives of the EU Military Committee, the US European Command and the NATO Allied Joint Forces Command in Naples.  The Minister of Defense of Bosnia and Herzegovina Sifet Podzic PhD addressed the participants and guests at the beginning of the conference.

The aim of the conference, better known as B-9 Forum, is strengthening the military cooperation between the Balkan countries by finding mutual models for dealing with security challenges, risks and threats in the region. Most of the activities at the conference involve coordination of joint training and education, with the aim of reaching the required level of interoperability, to enable joint activities in various situations. This is mainly related to the conduct of joint exercises and assessment of asymmetric threats at the Balkan.

B-9 Forum was established at the initiative of Greece and Turkey in 2006. The Chiefs of Staffs of the Balkan Countries established the official initiative with the signing of the Terms of Reference on 10th May 2007 in Brussels.  The host country of the conference rotates every year and the host for next year will be the Republic of North Macedonia.

General Gjurchinovski during his stay in Sarajevo will have an official meeting with the Chief of the General Staff of the Armed Forces of Bosnia and Herzegovina, General Sead Mashovikj, and he will visit Camp Butmir, where he will meet with the EUFOR Commander, Major General Alexander Platzer.