From the activities of the medical team in the ALTHEA mission 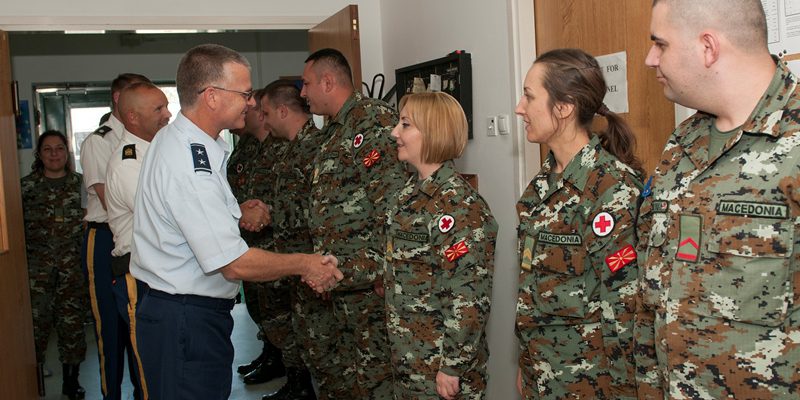 In the period from 18 to 26.9.2014, the members of the ARM medical team in the ALTHEA mission in Bosnia and Herzegovina had several activities that are important for the Macedonian team affirmation in the mission.

On the first day, 18.9.2014, the Macedonian contingent in the Camp Butmir – Sarajevo was visited by a delegation led by the Commander of the Vermont National Guard, USA, General Major Steven Cray.

In the period from 22 to 25.9.2014 in the EUFOR base in Butmir Sarajevo, the medical team provided the necessary medical support for the international military regional competition in futsal, which featured teams from Macedonia, Serbia, Montenegro, Bosnia and Herzegovina, Croatia and Slovenia.

In addition, on 22, 24 and 26 September at the embassy of the European Union (EU) in Bosnia and Herzegovina was carried out a three-day medical training for members of the delegation and EUSR staff (EU Special Representatives) in the EU embassy in Sarajevo.

During the training, Major Irena Dineva and Staff Sergeant 1st class Sinisha Petkoski explained the attendants the basic procedures for life-threatening conditions, cardio-pulmonary resuscitation, use of automated external defibrillator, procedures for emergencies, stopping the bleeding, and treatment of burns and injuries.