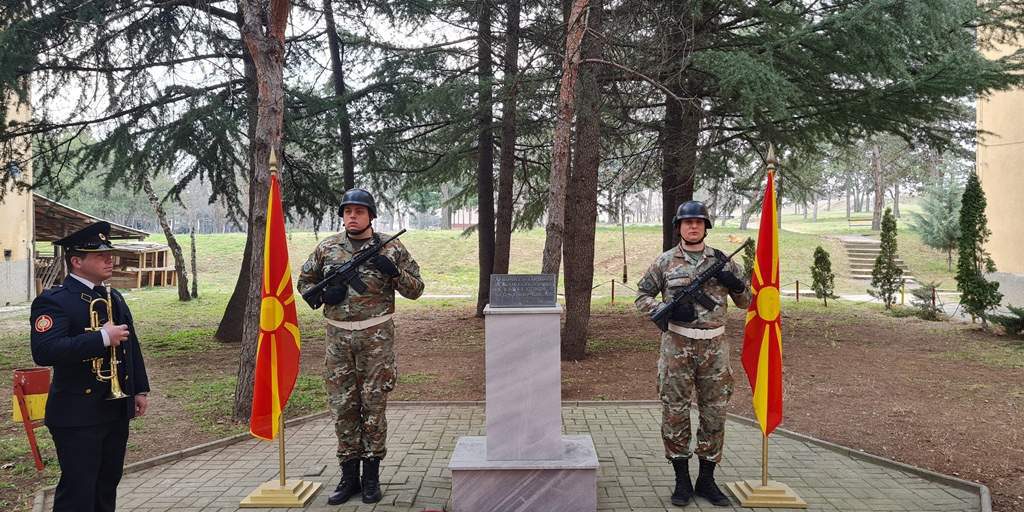 On the 28th of March 2022, there was the 21st commemoration of the former Military Police Commander, Captain 1st Class Ljupcho Mirchovski, who tragically lost his life 21 years ago. To mark this anniversary of his death and to honor him, today, the 28th of March, a bouquet of fresh flowers was laid at the memorial to the Captain, which is located at the Military Police Command in the military barracks Ilinden.

There were a lot of guests, including the commander of the Operations Command, Brigadier General Besnik Emini, a delegation of Military Security and Intelligence Service and G-2/GS of the Army, General Staff representatives, and representatives of units stationed at the military barracks Ilinden, his family members, friends and colleagues.

The commemoration was conducted abiding to the preventive measures against the spread of COVID -19 and the protocol to organize mass gatherings in accordance with the recommendations of the Commission for Infectious Diseases in order to protect people from the COVID-19 virus.

The Military Police Battalion Commander, Lieutenant Colonel Kire Nikolovski addressed the audience and talked about Captain 1st Class Ljupcho Mirchovski, who was one of the first officers who laid the foundations of the Military Police Battalion, on the 1st of April, 1992. Moreover, he remembered his professionalism, determination, resilience, and great understanding of the assigned tasks, goals and obligations in the process of building up this unit in the Army.

In addition, fresh flowers were laid at the memorial of killed defenders in Berovo and his grave in village Rusinovo in Berovo, to commemorate the former Military Police Commander by a delegation led by the current Military Police Battalion.

We, as Military Police Battalion personnel and your followers, have the obligation and honor to continue on the way you paved, remembering your deeds and being proud and grateful to have had you as our Commander.