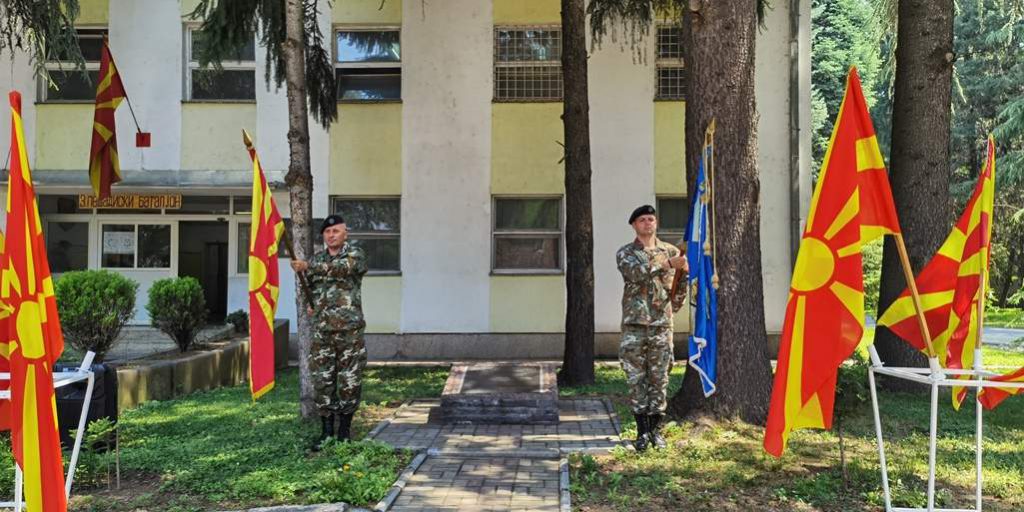 Marking 21 years since the death of members of the security forces from Tetovo garrison in the 2001 conflict, at military barracks ‘NH Kuzman Josifovski-Pitu’ in Tetovo fresh flowers were laid at the commemorative plaque placed in front of the garrison HQ in commemoration of their death.

‘Today we have gathered here, beside this commemorative plaque at our barracks, to honor the six members of Tetovo garrison who heroically gave their lives in defense of their country during the 2001 conflict. Isak, Nikolche, Pece, Vlatko, Blagoja, Blashko! We stand before the symbol of your sacrifice, sad but grateful for your displayed courage and heroism – being a model to us all. You demonstrated true patriotism and showed us how one should love his country with his whole heart. Your families should be proud, just as we, Army members, are proud we had you as our comrades. Our commitment is to never forget your heroic deed with which you obliged current and future generations of the Army of the Republic of North Macedonia. Eternal glory to you!’, he said.

A delegation from Tetovo garrison HQ, led by lieutenant Colonel Igor Stankovski and delegations from the Board of Veterans, Organization of Fighters from Gostivar and Tetovo, and ORORSM Tetovo (Organisation of Reserve Officers) laid fresh flowers at the memorial at military barracks ‘NH Kuzman Josifovski-Pitu’ in Tetovo.

Honoring the memory of the fallen soldiers, Army members and other guests paid respect to their patriotism, bravery and benevolence in protecting the territorial integrity and sovereignty of the Republic of N. Macedonia.