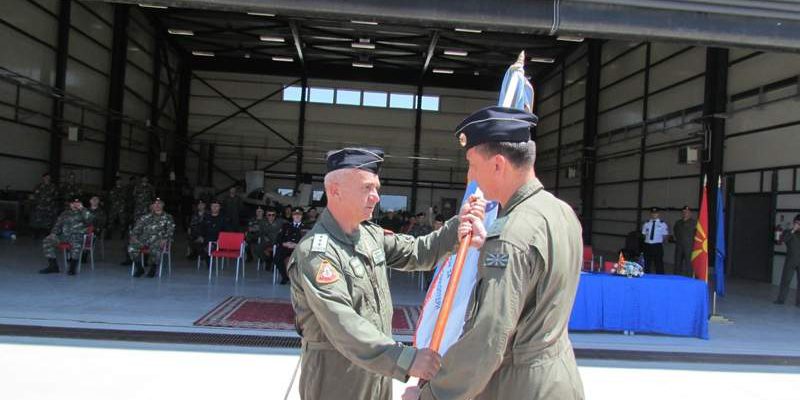 In the barracks “N.H. Strasho Pindzur ”, in Petrovec, a ceremony was held on the occasion of the handover of the duty Commander of the Helicopter Squadron (HC) from the Air Force WING (AF WING). The ceremony was attended by the Deputy Chief of General Staff, Major General Azim Nuredin, the Commander of  AF WING, Colonel Stojko Pejovski, the commanders of the subordinate units of AF WING, heads of sections and other guests.

In his address, the Commander of AF WING thanked Lieutenant Colonel Kire Bogdanoski for the results achieved so far, and asked the newly appointed Commander, Lt. Col. Femi Ljumani, congratulating him on his duty, for maximum commitment  and achievement of great results when accomplishing unit’s specific and challenging assignments.

Lieutenant Colonel Kire Bogdanoski in his speech said that in front of him is a trained and highly motivated team that has so far dealt with all kinds of tasks and have always performed at the highest level, thanking them for their commitment and professionalism.

The newly appointed commander, Lieutenant Colonel Femi Ljumani thanked for the opportunity to command and work with top professionals and stressed that in the future they will continue with the good work and will strive to achieve even more significant results. He also stressed that he will use the knowledge and experience from the work in this squadron so far, and expects support and engagement from all members of the unit, in the realization of its mission and tasks.