The fight against the pandemic is a priority for the Army as well: Today’s emergency medical aid reinforced with military ambulances

You are here:
CIVIL-MILITARY COOPERATION 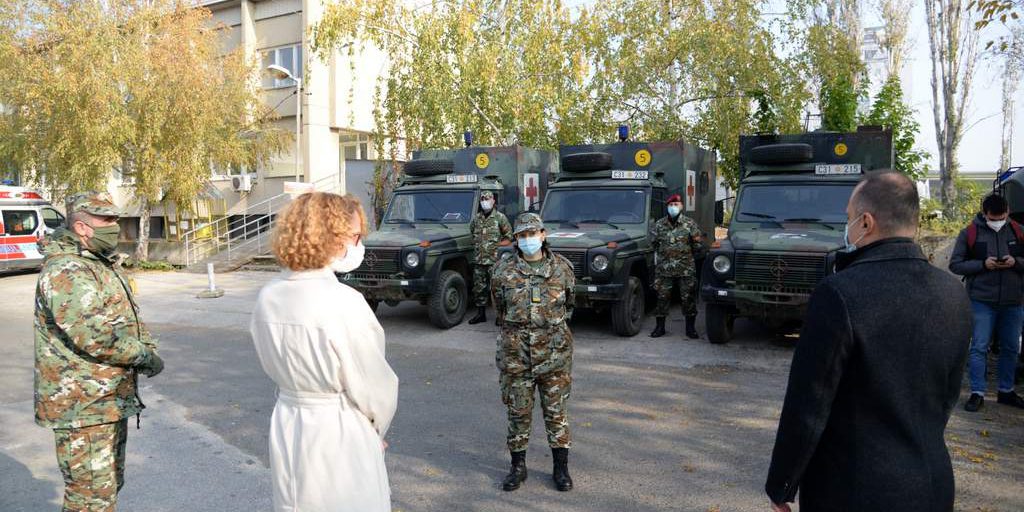 Based on the order issued by the President of the Republic of North Macedonia and Commander-in-Chief of the Armed Forces, Stevo Pendarovski to engage part of the resources and funds of the Army, as unarmed forces for medical support for the work of health facilities and centers of the Ministry of Health, today in the circle of the “Bucharest” hospital military ambulances were handed over for the needs of the Public Health in dealing with the consequences of the pandemic of the Corona virus.

The handover of the ambulances was attended by the Minister of Defense Radmila Shekjerinska, the Minister of Health Venko Filipche, the Chief of the General Staff of the Army, Lieutenant General Vasko Gjurchinovski, as well as the Commander of the Military Medical Support Battalion.

“The health of the citizens is our concern as well. When the country is in a critical situation, we must all be responsible and mobilized and find a way to help,” said the Minister of Defense Radmila Shekjerinska.

Shekjerinska added that the decision to assign these five vehicles along with two more, which will be made available in the interior of the country, will significantly strengthen the capacity of the Emergency medical aid.

“These vehicles are vehicles used by the Army and we believe that at this moment they should focus on the number one priority, which is the fight against the Covid and providing greater opportunities for the First aid in the capital where the greatest pressure is felt.” added Shekjerinska.

The Minister thanked the members of the Army and said that all resources should be directed where they are most needed, emphasizing that the Army has so far participated in dealing with the pandemic and that it will continue to be available.

Thanking for the support, the Minister of Health Venko Filiphce stressed the importance of the involvement of the Army and the aid sent by NATO in transport fans.

“As of today, we have 5 hospital vehicles at our disposal and 2 more, which will be additionally used for transporting patients in other cities. The pressure on the health system is enormous, the need for fast transport of patients to a hospital is often imposed. In the past period we have increased the number of hospital vehicles. “This assistance is valuable and will be very important, because it will increase the number of teams that will be available to transport patients along with the transport fans that we received as aid from NATO,” said Minister Filipche.