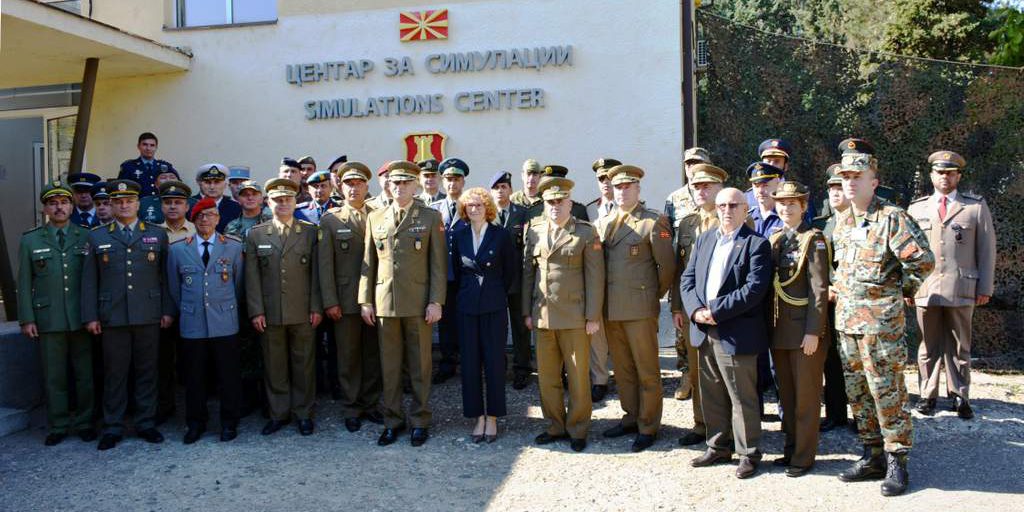 Within the framework of the “REGEX 19” exercise at the Simulations Center at “Alekso Damnievski- Bauman” barracks in Veles, there was a distinguished visitors day.

In her address, Defense Minister Radmila Shekerinska said that apart from the field exercises, with the exercise “REGEX 19”, which is the first of its kind in our country, the Army showed a diverse capacity, that we can be efficient regarding the funds, and also that we have the knowledge to use the technical capacities of the Simulations Center and train in a simulated and computer environment. The Minister took the opportunity to emphasize the international character of the exercise, at the same time expressing gratitude to the 22 partnership countries that took part in the planning process of the exercise and for the mentorship of five countries- members of the Alliance. In the end the Minister said that we all believe in the capacities of the Army and we are certain that we will meet the challenge that the membership in the Alliance brings.

The Commander of the Joint Operations Command Major General Pavle Arsoski, expressed his amazement at the diversity of the countries participants and that the trainers and the trainees come from different parts of the world. This exercise is the proof for the readiness and interoperability of the Republic of Macedonia as the future 30th member of NATO.

In his speech, the director of the exercise, Lieutenant Zvonko Majstorski, emphasized that the “REGEX 19” exercise is an exercise that brings together the strength, capacities, experience and technology of 22 countries from around the world participating in the planning process, fifteen of which were directly included in the execution phase. He also stated that the exercise is a result of a long and detailed planning process and all the countries contributed to it.

The attendees were familiarized with the goals and the complete organizational process starting with the preparation, planning and execution of the exercise. They also visited the personnel that participated in the realization of the exercise at the Simulations center.

Briefing for the media with reference to the military exercise „Swift Response 22“
06.05.2022