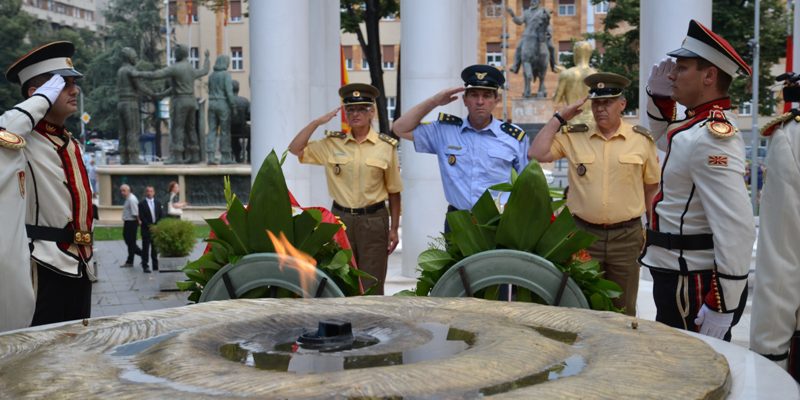 Days before the anniversary of the beginning of the First World War, the Army of the Republic of Macedonian took part in the international commemoration honoring the victims of one of the biggest wars of the 20th century. The members of the Military Orchestra performed the composition “Il Silenzio – Silence” and a delegation of ARM laid a wreath at the monument of the fallen heroes who gave their lives for Macedonia.

The event was organized in cooperation with the Embassy of the Republic of Italy in the Republic of Macedonia. At the event the Director of the Military Museum at the Ministry of Defence, Dr Aleksandar Stojchev said that we could not change this sad part of the world history, but it was an incentive to improve our relationships and coexistence, finding things that connect us through mutual respect and cherishing peace. 10 million men and women killed in the war, 21 million wounded, a huge number of missing people and homes that were destroyed, should serve as a reminder, we as the descendants of the victims of the First World War all around the globe not to deter from these ideals, pointed out Dr Stojchev.

The project for commemoration of the victims of this war was organized by the Council of Ministers of the Republic of Italy to mark the 100th anniversary of the beginning of the First World War and at the same time it is a an act of humanity to honor all the victims of this great war. A wreath of fresh flowers was laid at the monument by the attendees of the commemoration and the composition “Silence” was performed at sunset at the same time at different places around the world.