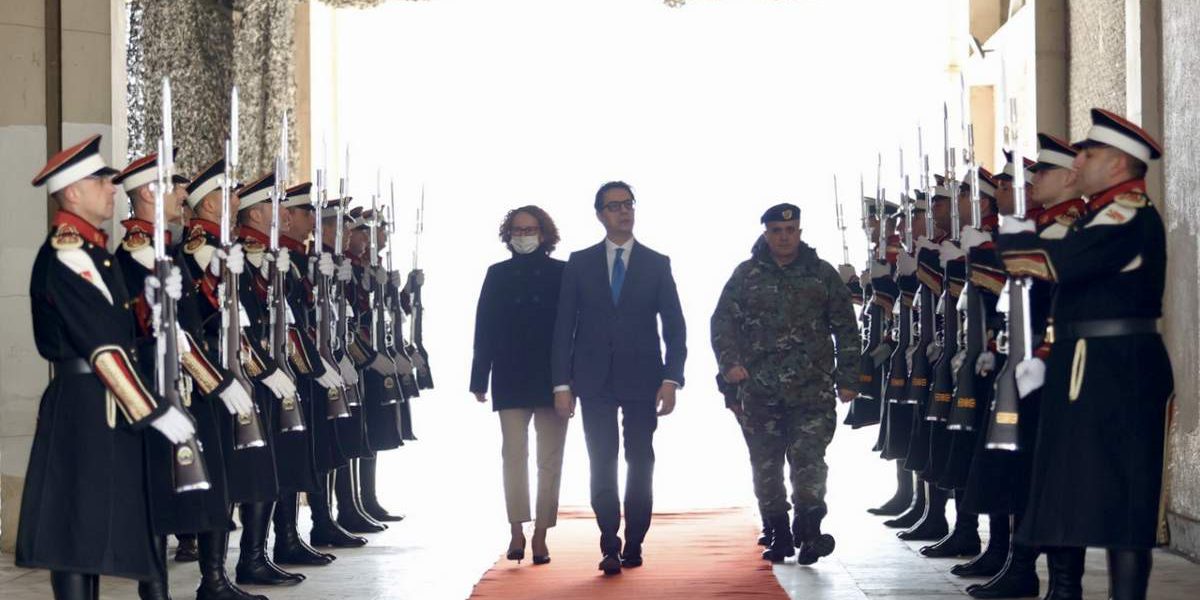 At the briefing, the Chief of the General Staff, Lieutenant General Vasko Gjurchinovski and the Director of the General Staff, Major General Zoran Milevski, presented the current condition and the realization of the planned activities in the functional areas which are part of the combat readiness, to the President Pendarovski, the Minister of Defense Radmila Shekerinska, Army Generals and representatives of the Presidential Staff and the Ministry of Defense.

The completed tasks and achievements of the Army in 2021 were presented to the military superiors, as well as the key tasks for 2022, and the following areas were covered: personnel management and moral, operations in the country and abroad, training and exercises, logistic support, military planning and structure of the forces, links and communication, budget and CIMIC.

In his address General Gjurchinovski stressed the readiness of the Army Commands and Units for conducting all the activities from the planned dynamics in the process of achieving NATO capability goals.

At the same time the commitment and the professional performance of the tasks of the Army members was stressed, which enabled realization of all planned activities and tasks, as well as the readiness for assistance to the government institutions and help to the citizens.

In the review of the last year, Minister Radmila Shekerinska emphasized that in 2021 the first anniversary of the NATO membership was celebrated and that North Macedonia successfully passed the test of the first anniversary as a member of the Alliance. “We also worked hard on the military integration and we finished it in a record time, in only 19 months, by which we become recognizable as a NATO nation which completed the military integration the fastest. The fast completion of the military integration is a continuation of the successful politics in the Ministry of Defense which started with the increase of the budget, procurement of new equipment, NATO membership and the total strengthening of the Army’s capacities”, said Minister Shekerinska and also stated that our sky became part of the air policing system. “That means additional strengthening of the county’s sovereignty and territorial integrity. All this should give a sense of pleasure to the present here because the defense and the safety of the country has risen to the next, higher level”, stated Minister Shekerinska.

The Minister also emphasized that the first five officers who will represent us in the NATO command structure in Izmir, Mons, and Brussels are already selected and a selection for additional seven has started. “The Permanent Delegation of North Macedonia was backed up with personnel as well as the Liaison Office in SHAPE. Understanding the hazard from contemporary security challenges, a NATO Cooperation Memorandum in the area of cyber security was signed, also we cooperate in this area with our strategical partner the USA”, stressed the Minister adding that after four and a half years of intensive activity the image of the Army is completely changed, starting with higher salaries and equipment. Also there are conditions for further development in accordance with the NATO standards and cooperation with the allies.

In the concluding speech, the President and the Supreme Commander Stevo Pendarovski expressed his satisfaction with the professionalism, dedication and sacrifice shown by the members of the Army in dealing with the pandemic and fires across the country.

The President said that the investment in the modernization and equipping of the Army must continue, because by strengthening our defense capacities and potentials, not only the Army benefits, but also reciprocally affects the economic growth and the higher standard of living of the citizens. “Regardless of the fact that the health and energy crises are pushing for a different distribution of budget priorities, the state needs to remain committed to investing in defense and security, because they are the basis for the functioning of other social sectors,” said President Pendarovski.

The President highlighted the joint declaration signed with NATO last month, which formally concluded the process of our integration into the Alliance, and said that NATO membership helps us better deal with the old and new security threats.