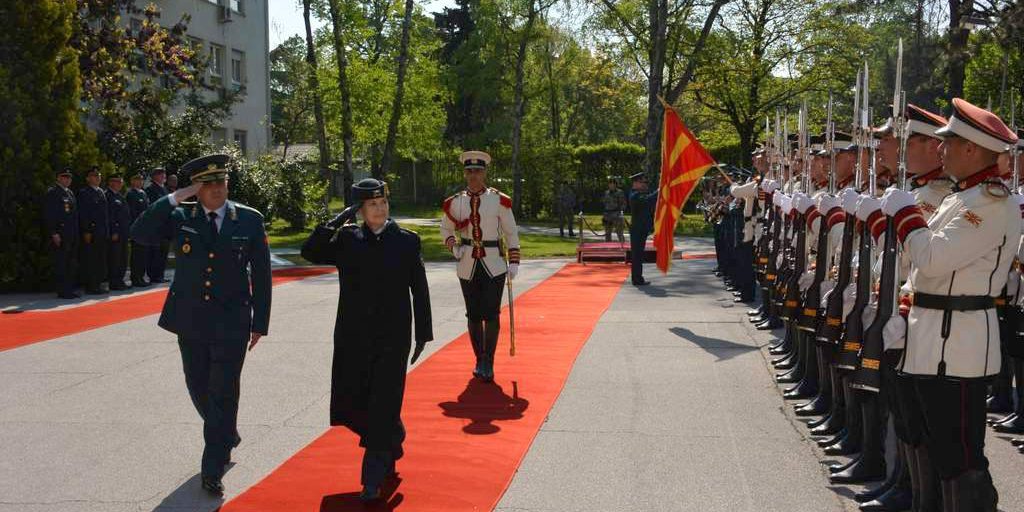 High level military delegation of the Slovenian Armed Forces, led by the Chief of the General Staff, Major General Alenka Ermenc, which is in an official visit to the Army, was at the General Staff today.

After the delegation of the Slovenian Armed Forces was welcomed with high military honors, Major General Alenka Ermenc had a meeting with her host, the Chief of the ARM GS, Lieutenant General Vasko Gjurchinovski and with the Minister of Defence, Radmila Shekerinska.

During the official visit General Gjurchinovski expressed his gratitude for the support and continuous effective cooperation between the two armies as close partners, and he also expressed his belief that that partnership will continue in the future but as full-fledged NATO members. He also pointed out that an exchange of our military capacities, joint participation in projects like Balkan Medical Task Force, the bilateral exercise ‘Challenge’, the simulation centre are all examples of building mutual capabilities and support of our close cooperation.

The process of transformation and modernization of the army in accordance with the new strategic operational review, taking into consideration all the lessons learned from Republic of Slovenia’s NATO membership, participation of the Army in Peace Support Operations, as well as in many multinational and bilateral exercises, engagement of the army in support of the Ministry of Internal Affairs in dealing with the migrant crisis were also topics presented to the military delegation of the Republic of Slovenia during their visit.

At the meeting, Minister Shekerinska expressed her gratitude for Slovenia’s support of our NATO membership. The minister congratulated Major General Ermenc on her position Chief of the Armed Forces of Republic of Slovenia. Shekerinska stated that Slovenian’s prompt ratification of the Accession protocol is a clear message that their support will continue, and that the two countries are strengthening their partnership and their military cooperation.

Further on, the Slovenian military delegation accompanied by Deputy Chief of GS, Major General Azim Nuredin visited the Military Police Battalion at the military barracks ‘Ilinden’, where a briefing on the unit was held, and also a methodical-demonstration exercise and a presentation of part of the equipment in possession of the unit were carried out.