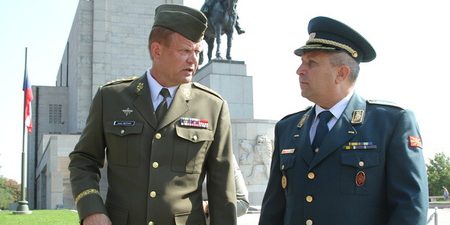 A delegation of the Army of Republic of Macedonia (ARM), led by the Chief of General Staff, Lieutenant General Metodija Velichkovski is in a three-day visit of the Armed Forces (AF) of the Czech Republic.

Increasing the military cooperation in areas of mutual interest was discussed at these meetings, for example exchange of experiences gained from the participation of the helicopter units in the UN missions, opportunities for military-technical cooperation in the defense industry, conduct of joint training and education of the military personnel.

The ambassador of Republic of Macedonia to the Czech Republic N.E. Paskal Stojcevski also attended these official meetings.

The delegation made working visits of the Military Air Force Base ‘Kbeli’ in Prague, and of the Helicopter Air Base ‘Biskajska’, where they attended the opening ceremony of the military exercise ‘Ample Strike 2016’.

Earlier, during the visit General Velichkovski, together with his host, paid tribute to the Unknown Soldier at the Czech National Memorial Centre ‘Vitkov hill’ by laying wreaths of fresh flowers.

A visit of the Training Command at the Military Academy in Vishkov, is scheduled as part of the visit, where since 2001 a large number of ARM members have completed training in many courses.

This working visit, which is being realized upon invitation from General Bechvar, is a result of the earlier good cooperation between the Army of the Republic of Macedonia and the AF of the Czech Republic, in many areas referring to defense. In May this year General Bechvar had the opportunity to familiarize himself with the experiences of the ARM gained in dealing with the migrant crisis.

The ongoing visit of the ARM delegation to the AF of the Czech Republic, which is a member of the Visegrad Group and NATO, is especially significant for strengthening the support from this partner Country in the Euro-Atlantic aspirations of Republic of Macedonia.