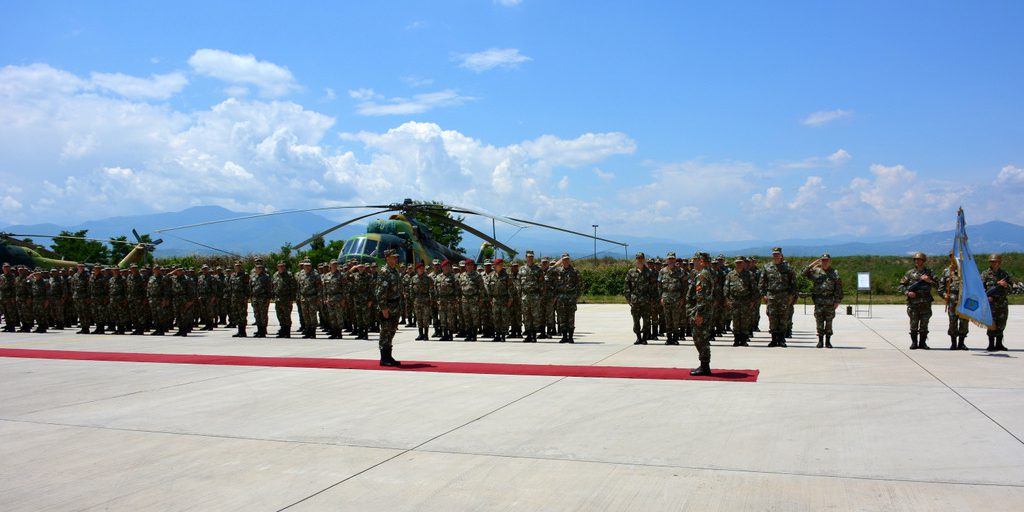 At the barracks “Strasho Pindjur” in Petrovec, the Day of the Air Force Brigade (AFBde) was celebrated. The event was attended by: the Chief of General Staff Lieutenant General Metodija Velichkovski, ARM generals, MoD State Secretary, MoD and ARM GS high officials, subordinate units’ commanders and commanders of other units of ARM GS, former commanders of the brigade, representatives of the local government and other high officials.

AFBde Commander, Colonel Robert Malezanski in his speech said that the renewing and proper maintaining of the equipment and the aircrafts of this unit was of vital importance for carrying out the mission and the training of the service personnel. All these efforts were aimed at maintaining high level of combat readiness of the unit, as a precondition for successful accomplishment of the mission. The commander congratulated the members of AFBde and upon this occasion he said that we should also thank the retired members of the Air Force Brigade for their invested effort, which contributed to the development of the unit.

At the ceremony of the day of the unit, promotions for officers and non-commissioned officers of the unit were read, as well as stimulative awards for the members of AFBde. The Aviation Technical Maintenance Squadron was pronounced the best unit of AFBde.

At the sport grounds in the barracks “NH Strasho Pindjur” in Petrovec, sport competitions were held between the units of AFBde, which were part of the program for marking the 10th June Air Force Brigade Day of the Unit, a unit within the Joint Operations Command. The overall winner was the Air Surveillance and Reporting Battalion, and at the ceremony its members were presented with a certificate and a cup.

The existence of the AFBde is based on the decree by the President of the Republic of Macedonia, issued on 10th April 1992, when ARM Air Defence (AD) and Air Force (AF) command was established, which included the Air Force Brigade with the aviation, transport and combat helicopter squadron. .