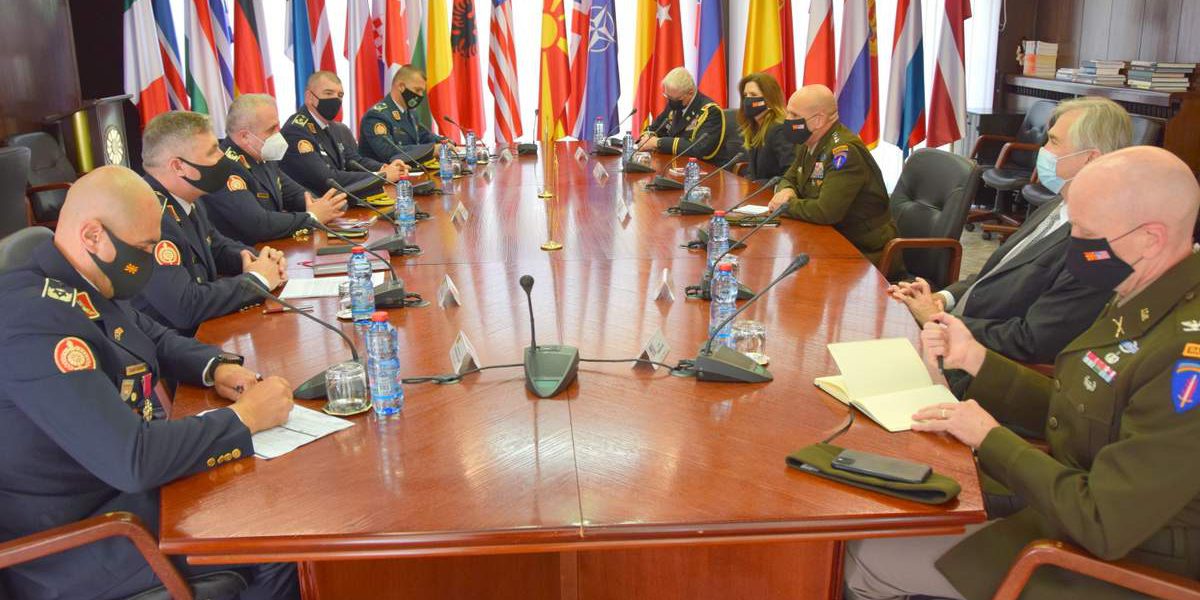 Today, the Commander of the United States Army Europe and Africa, Chrisopher Cavoli paid a work visit to the Ministry of Defence and the General Staff of the Army of the Republic of North Macedonia, as part of his stay in our country.

During the meeting with the Chief of the General Staff and part of the Army Generals, General Cavoli was introduced to the activities regarding the process for our complete integration into NATO, the participation in the NATO-led peacekeeping operations, as well as the participation of the Army in the process of dealing with “Covid 19” and the preparation for full operational readiness of our biggest declared unit, the light infantry battalion group.

In this context, they discussed the strengthening of the mutual cooperation and the current activities with the exercises led by the Command of the United States Army for Europe and Africa, such as the exercise “Decisive Strike 21”, as part of “Defender Europe 21” and the mutual engineering activities at TA “Krivolak” which improved the conditions at the training area for carrying out big exercises.

General Cavoli praised the intensive integration process by the Army of the Republic of North Macedonia after the full-fledged NATO membership, pointing out that this is a result of the excellent previous readiness and work before the NATO membership.

At the meeting, General Gjurchinovski expressed his gratitude for the continuous support by the US Armed Forces because by participating in mutual training and exercises led by this Command, our units and members of the Army improved and strengthened their abilities and achieved the interoperability in accordance with the NATO standards. He also noted that in the upcoming period, besides providing equipment and participating in exercises, the General Staff will pay special attention to the personnel management which will provide full interoperability in the commanding and carrying out the NATO procedures.

At the meeting with the Minister Shekerinska, the General was informed that the NATO integration of the Republic of North Macedonia is going according to the plan and it is expected to be completed until the end of this year. She expressed her gratitude for the activities of the engineer unit of the United States Army during the preparation of the TA “Krivolak” for the exercise “Decisive Strike 21”. The development of “Krivolak” is a mutual goal and the Army of the Republic of North Macedonia and the United States Army work together in order to achieve this goal – said the Minister.

The NATO membership of the Republic of North Macedonia and the beginning of the negotiations with the European Union are of key importance for the safety and stability of the region.

During the meeting they discussed the importance of improving the regional cooperation between the allies and the need to resolve the differences within the Euro-Atlantic family as part of the dedication for a common safety.

As some of the more important activities of the rich mutual cooperation in the exercises this year, we can point out the exercise “Decisive Strike 21”, also “Trojan Footprint 21”, as well as the mutual engineering activities as part of the big exercise on the territory of Europe “Defender Europe 21” led by the United States Army, created to provide readiness and interoperability between the United States and the allied armies whose focus is building operational readiness and interoperability with the NATO allies.