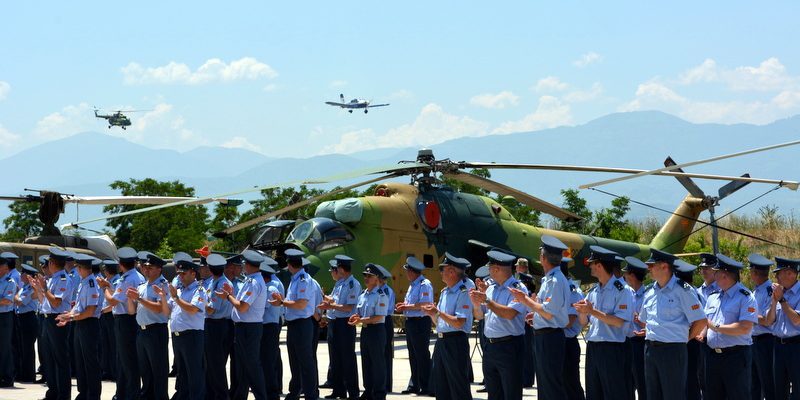 Today, 10th of June, in the barracks “NH Straso Pindzur” in Petrovac, a ceremony was held on the occasion of the Air Force Brigade Day. The ceremony was attended by Vice Minister of Defence of the Republic of Macedonia Emil Dimitriev, MOD State Secretary of the Republic of Macedonia Saso Stefanoski, JOC Deputy Commander Brigadier General Muhamed Racaj and other dignitaries.

Vice Minister of Defence, Dimitirev, in his address congratulated the Air Force Brigade Day to the brigade members, stressing that what has been achieved over the past 22 years is due to the skills, abilities, collective spirit, high professionalism and patriotism of dedicated and proud ARM members.

The Vice Minister said the aircrafts we own will be modernized in the future with more sophisticated and advanced variants. Dimitirev also highlighted the Balkan regional initiative for air defence that will enable the development and connection of national capacities for air monitoring and reporting.

In the end the Vice Minister said this is his last address of this office, which was an opportunity for him to express his gratitude, and to highlight that much more can be done in the area of defence. He also promised that, as an MP, he will strongly support the Macedonian Army stating that good days are about to come for ARM.

Air Force Brigade Commander, Colonel Kire Koleski, noted that this holiday evokes dose of emotions, and makes them proud of what has been achieved. The Colonel emphasized the fact that this year, for the first time, we will have the first pilots trained by the Center for Training Pilots, who were trained in accordance with the best standards and, certainly, for the needs of ARM.

At the ceremony, on the occasion of the Air Force Brigade Day, were given incentives to several members of the unit, and the celebration ended with an air parade, static display and tactical-technical demonstration of the equipment that the units possess.

The Brigade was formed on April 10, 1992 with a decision of the President of the Republic of Macedonia as a command of the anti air defence and air force (PVO and VV). In 2005, with the ARM reconstruction program, the Brigade was transformed into aviation WING (Air Force reconnaissance attack group), and in 2012 the Air Force Brigade was re-established within the Joint Operations Command.