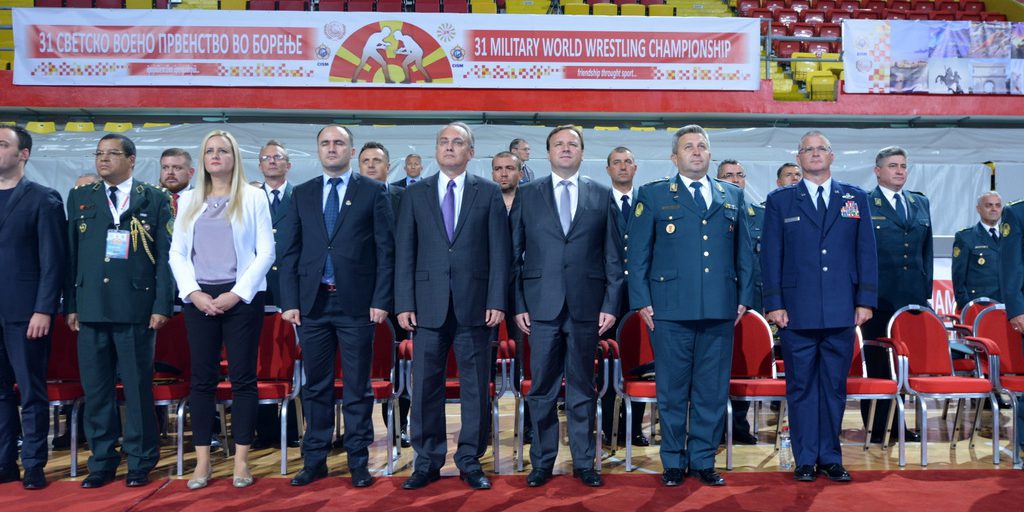 An opening ceremony of the 31st World Military Wrestling Championship, which is to take place in the period between 21st to 25th September, has been held at the VIP arena ‘Boris Trajkovski Sports Centre’

Today’s ceremony was also followed by ARM Generals and Management of the Ministry of Defense, representatives of the International Military Sports Council (CISM), as well as commanders and a large number of ARM members.

The large number of visitors and media confirms the interest in this major military-sports event where more than 400 sportsmen and sportswomen from 32 countries and 4 continents will compete following the rules of the World Wrestling Association.

The ARM Military Wrestling Team, comprised of 18 competitors, today and in the following three days are going to pit their strength against top competitors, amongst which there are participants and winners of medals from Olympic Games and World Championships.

The fights are organized in several categories, in freestyle and Greco-Roman wrestling style, and according to the agenda at the end of each day of the competition winners are to be awarded medals.

Sports competitions and sports in general for the Army is of great importance because they do not only help in maintaining health and improving the individual physical condition and endurance of its members, but they also represent a chance to make new friends and deepen the mutual respect and further cooperation.

By organizing a military sports event on such a massive scale Republic of Macedonia, which has been a member of the CISM since 2005, once again confirms its dedication to military sports and its contribution to promoting sports, friendship and world peace.