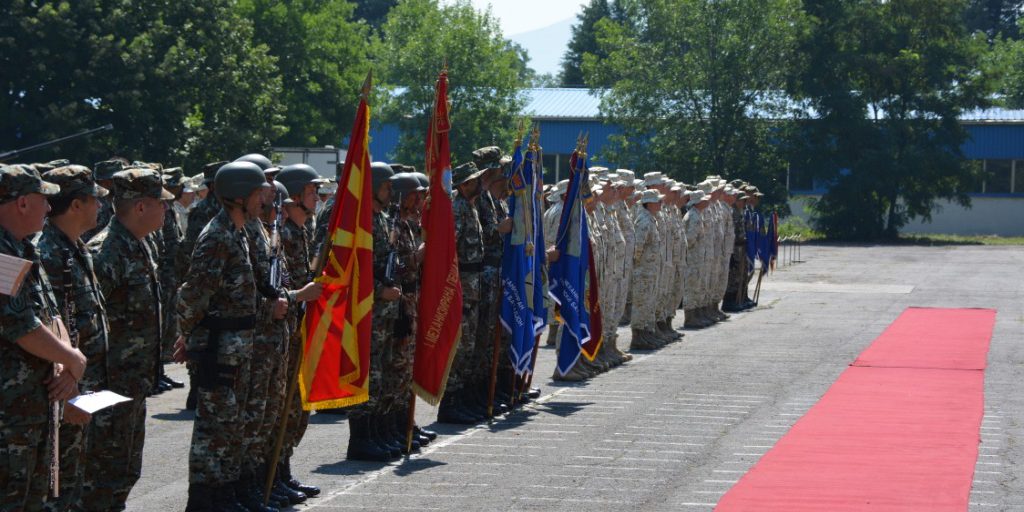 Today 25th July, at the barracks “NH Kuzman Josifovski Pitu” in Tetovo, there was a welcoming ceremony for the soldiers from the 1st Mechanized Infantry Brigade (1st MIBde), part of the ARM contingent who were deployed in the peacekeeping mission ISAF in Afghanistan.

The welcoming ceremony for the ARM contingent returning from the mission ISAF was attended by: the Minister of Defence Dr Zoran Jolevski, the ARM Chief of General Staff Lieutenant General Gorancho Koteski, the Deputy Minister of Defence Arben Labenishta, the MOD State Secretary Sasho Stefanoski, high officials from the ARM and MOD, local government representatives, relatives of the returning soldiers and other guests.

“You have successfully fulfilled the responsibilities and challenges of this peacekeeping mission; we have been participating in for almost a decade. The results you have achieved in the past six months have been acomlished due to your skills and abilites, as well as your teamwork, high professionalism and patriotism, which are another confirmation that you are dedicated and proud members of our army” said the Minister of Defence of the Republic of Macedonia, Dr Zoran Jolevski, at the ceremony in the barracks Tetovo.

The Chief of the General Staff of ARM, Lieutenant General Gorancho Koteski, highlighted that with the participation in the peacekeeping missions, ARM not only had gained more experience in conducting tasks in the theatre, but also proved the interoperability with NATO members, a family which we deserve to be a part of. In his statement Lieutenant General Koteski said that ARM will stay in Afghanistan even after the end of ISAF mission, and will take part in a new mission” Decisive Support”.

ARM participated with members from the Mechanized Infantry Brigade in the sixteenth rotation of the peacekeeping mission ISAF, and the total number of ARM participants was 151. The service personnel and the senior national representative were deployed in the ISAF Headquarters in Kabul.