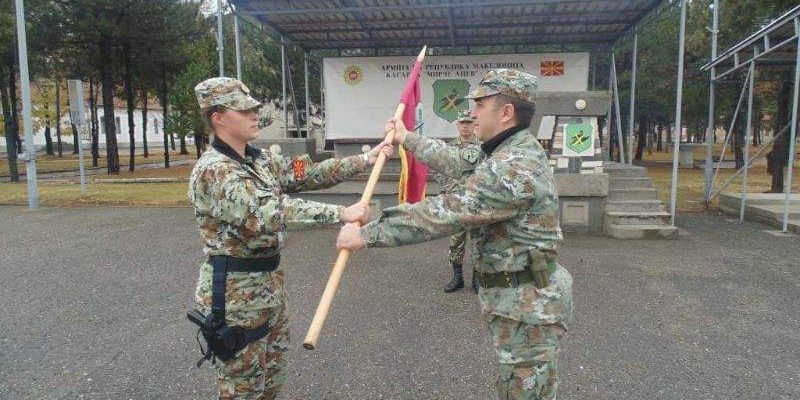 The Army is the main link in the entire security system guaranteeing the peace and security of the country and the region for these women. Although it is still considered a male world in our country, these ladies, who proudly stand side by side with their male colleagues, say that teamwork has taught them to function as one.

“Despite the predominance of men, we are actually all soldiers and the professional relationship is at a very high level. Functioning and working in such an environment where terrain and teamwork prevail has taught us to function as one,” said Sonja Mihalcheva, 29, member of the Ranger Battalion in the Army of the Republic of North Macedonia, for Lokalno.

She says that the road to success, especially entering an elite unit like the Ranger Battalion, was not easy at all.

“Not so frequent image of women being part of the Army was the biggest incentive for me to join, in order to prove the opposite that we are capable and we can. The road to success, especially entering an elite unit like the Ranger Battalion, was not at all easy. I faced a lot of physical and mental pressure that actually helped me become a strong person and team player, which are the main characteristics of a soldier. Through the entire selection process you learn that you have to respect and help each other regardless of gender and religion, because you become part of a large family,” says Mihalcheva who has been employed in the Army since 2015. I have a Medical High school diploma and a Degree in   Psychology.

She says that her family, who guided her with their advice and gave her strength to succeed in the set goal, was her support throughout the whole process.

“There is no greater feeling than the thought that somebody believes and is always there for you, somebody to tell you that you can succeed when things are difficult and you lack confidence”, Sonja explains.

The ranger starts her work day by putting on her uniform, raising the flag and line up.

“Then, everyone receives their daily assignments from their superiors and through the chain of command they are transferred to each member, who further completes them. Basically, the working day of a member of the Army consists of constant maintenance of physical fitness, as well as intellectual and tactical readiness. Every day we practice, learn and upgrade the already acquired knowledge. When you are part of the Army you should know that with the end of working hours your responsibilities do not end completely. You are a person who needs to be careful how he behaves outside the workplace and be an example to others. I usually use my free time to relax with my loved ones, take walks and socialize, and I always end the day by reading a book,” she says.

Mihalcheva is the first female Ranger to win first place in the Ranger Games, which she says is due to her long-term work and self-belief.

“As a member of the Ranger Battalion, there are always challenges ahead of you and where you always manage to prove to yourself that with a lot of effort and work, the impossible is achieved. For me one of those challenges was the Ranger Games where females participated for the first time and we proved that we are able and capable. The physical readiness for enduring those games is not due to several months of preparation, on the contrary it is due to many years of work and investment in yourself. They were really hard, but my great support was the team that encouraged and believed in me and that constantly reminded me that we always compete with heart, “she explains.

Sonja says she has not been part of a mission or international exercise yet, but hopes to gain that experience in the future.

“Nowadays I am glad that I see more and more women interested to enlist and be part of the Army of the Republic of North Macedonia, which shows that they are becoming aware that they can cope with great challenges and be side by side with men. The conditions for entering the Army are generally the same for men and women, but one of the main conditions is to believe in themselves and in what they want to achieve. To show physical and mental readiness and endurance, as well as the ability to deal with unusual situations,” she explains.

For her, the Army is the main pillar that guarantees the sovereignty and integrity of a state.

“In our case, as a member of the NATO alliance, the Army is the main link in the entire security system, i.e. in guaranteeing peace and security of the country and the region,” said the Ranger.

Sara Misheva has been working as an officer in the Artillery Battalion in the barracks “Mirche Acev” – Prilep, for six years. She is a battalion commander and in charge of commanding and leading a unit of about 70 soldiers.

“The interest for this profession was born in high school, although from a young age I saw myself in such professions that require sacrifice. Although I was committed to learning languages ​​at that age, the decision to apply at the Military Academy was literally at the last minute and I am happy to have made that decision. I had the support of my family from the beginning and they were with me both during school and at work. I usually got the advice from people who were already in this profession, and the comments were mostly positive,” says Misheva, who is 28 years old and lives in Veles.

She explains that her tasks are mainly command and leadership, such as organizing and conducting training, performing various exercises, combat and preparatory shooting, and coordinating and motivating the entire staff of her team.

The habits and responsibility of wearing the uniform certainly remain in private life. Discipline and order become normal, and of course it may be strange to people who do not do this work. Every day I face certain challenges that have a certain weight. “I will single out the biggest achievements: twice selection for the best platoon in the Command Battery, where I was originally placed, for the day of the unit and as part of that selection for the best battery in the Brigade,” she said.

Misheva has not participated in a peace support mission so far, although she would certainly like to.

“A great experience abroad for me was the “Captain Carrier Course”, in the United States, where I was seven months and successfully completed it. Of course, to attend it, certain criteria needed to be met. The experience was great and it would certainly be useful for me to perform my duties and responsibilities here,” she said.

The officer explains that from year to year the interest of women to join the Army is greater, which makes her happy and she encourages all women to enlist in even greater numbers.

The criteria for enrolling at the academy are the same for everyone who wants to apply. All the required documents and conditions to be met are listed in the internal announcement, the only difference is physical fitness checkup, underlines Misheva.

Although she commands about 70 soldiers, she explains that the relationship with colleagues and subordinates is primarily human, and then professional.

“As I mentioned before, the uniform itself carries certain obligations and duties depending on your appointment that must be respected, regardless of gender. The relationship with my colleagues and subordinates is first of all human and then of course professional,” says Misheva for Localno.

For her, the Army of the Republic of North Macedonia is the staple of peace and territorial integrity of the country.

Following the trends of modern armies

The Ministry of Defense and the Army of the Republic of North Macedonia are making efforts to strengthen the capacities of the mechanisms for gender equality, which means a more sensitive approach to the members of the Armed Forces on issues in this area. We follow the trends of modern armies in the world which show that the increasing representation of women in the army structures is of utmost importance. Since 2009 the Program for Equal Opportunities for Women and Men is being implemented in the Ministry and the Army, whereby the principles for equal opportunities for women and men and the gender perspective are being promoted and developed, MoD officials explain.

Therefore, they emphasize that the trend of improving the representation of women in the structure of the Army continues.

“Of the total personnel in the Army of the Republic of North Macedonia, 10.14% are women, of which 16.58% are officers, 10.93% non-commissioned officers, 5.56% professional soldiers, and 33.82% are civilians in the Army. The trend of improving the representation of women in the Army structure continues, especially with the officers, so that there are already 3 colonels in the Army and 33 lieutenants-colonels. The number of female majors, captains and lieutenants is satisfactory. Women enlisted in the Army at NCO and officers courses for the first time in 1997,” MoD officials stated.

They note that the Army has authorized personnel to intervene in case of harassment at work.

“In the Army and the Ministry of Defense there are 21 authorized persons for mediation in case of harassment at work, as well as 36 gender representatives whose data are publicly available and all employees of the MoD and the Army are familiar with them. It should be noted that continuous training and education on gender equality is constantly carried out, so as campaigns and activities for promotion and introduction of 1325 Resolution on -Women, Peace and Security of UNSC,” say the officials from the MoD.

Angela Sibinovska, member of the Macedonian Army “I have been wearing a uniform since the age of 18, I missed my family and food in Afghanistan”
07.03.2022