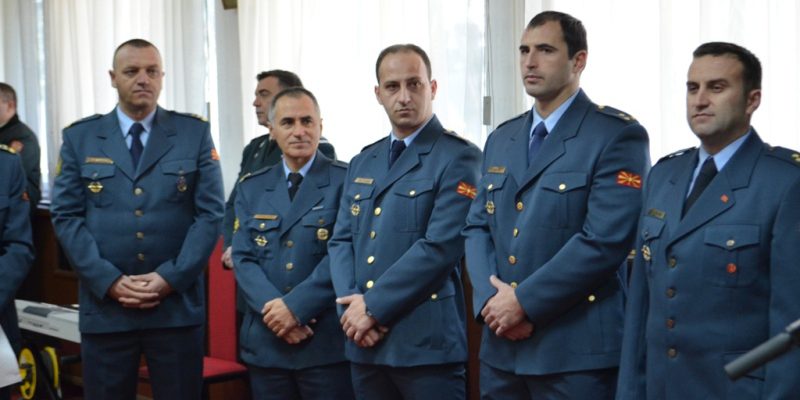 On 26 February 2014, at the military airport in Podgorica Golubovci a ceremony was held to mark the completion of a higher level of flight training on helicopter Gazelle for three Macedonian pilots.

The ceremony was attended by the Ambassador of the Republic of Macedonia in Montenegro, Mr. Alexander Vasilevski, a delegation from the Ministry of Defence and Macedonian Army consisted of Commander of the Macedonian Air Brigade Colonel Kire Kolevski, non-resident defense attaché Colonel Doncho Kuzmanov, LtC Aco Stanojkov, representatives from the Ministry of Defence of Montenegro and the Montenegrin Army, Commander of Air Force Colonel Zivko Pejovic and members of the Air Force of Montenegrin ARMY.

The pilots of the Macedonian Air Brigade: Capt. Nikola Softovski, Capt. Goce Sekulovski and Capt. Aleksandar Donev in the past five months completed a higher level of flight training in the Montenegrin Air Force where they completed flying hours of 60 hours each.

In his remarks during the ceremony, Colonel Kire Kolevski Colonel Donco Kuzmanov and Colonel Zivko Pejovic emphasized excellent bilaterlna cooperation between the two ministries and armies, especially in education, training and rational utilization of the capacities of the two armies. It was announced that this cooperation will continue in the future by finding new forms of training and activities.

At the end of the ceremony the three pilots of ARM were awarded certificates of completion of flight training for helicopter Gazella.

Flight training of pilots of the Macedonian Army was completed on the principle of reciprocity with the education of cadets from Montenegro at the Military Academy in Skopje.