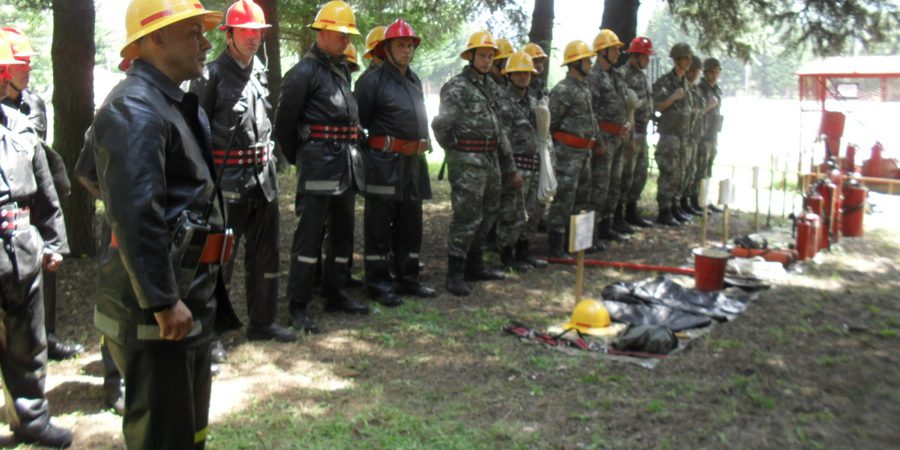 On 23.06.2016, in barracks “Cede Filipovski-Dame” in Kicevo a tactical training exercise (TTE) entitled : “Procedures of fire fighting units in different situations” was held. The participants at the exercise were the personnel of 4th mechanized infantry battalion and the personnel of Kicevo fire-fighting unit.

TTE was organized at the level of the 1st Mechanized Infantry Brigade. Brigadier General Zoran Mileski and commanders of subordinate units attended the exercise.

During the exercise, the personnel from 4th mechanized infantry battalion together with the personnel of Kicevo fire-fighting unit conducted alert procedures in a fire caught house, evacuation of personnel and premises, first aid to injured from burns and suffocation.

In the practical part of the exercise ARM personnel joint with the personnel of Kicevo fire-fighting unit practiced the procedures in case of a traffic accident with a civilian vehicle, extinguishing the fire, and extraction of the wounded from the car.

The aim of the TTE was to train personnel with realistic scenarios in order to be able to react in case of a potential outbreak of fire in the barracks, separate buildings, in a traffic accident with a civilian vehicle or when assisting the fire-fighting unit by acting professionally and timely.

Through various forms of performance of fire fighting training the personnel has shown a high level of professionalism. This training was conducted in ARM units just before the summer season, when there are real dangers of increased fires.