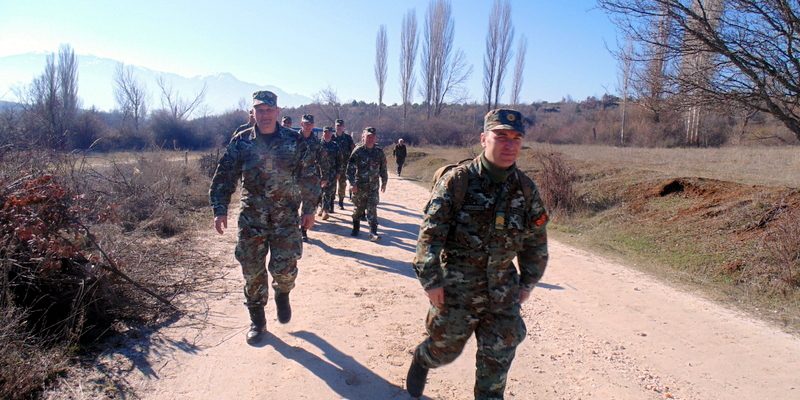 On February 16 (Sunday) marking the 70th anniversary of the February expedition organized by the Association of combatants from manicipality of Prilep realize traditional recreational march under the slogan “The roads of February expedition” which featured soldiers and officers from the garizon “Mirche Acev”.

On the march, despite the participation of personnel from ARM, also participated climbers from mountain associations and citizens of Prilep, Bitola, Kavadarci, Dolneni and surrounding villages, and they take the route that started from the museum “11. October” in the centre of Prilep through the village Nov Prisad, village Star Prisad, village Nebregovo to the ultimate goal monastery in Atanasij s. Drenovci, dolnensko.

Upon arrival in s.Drenovci ceremony was held, attended by mayors of Prilep, Marjan Ristevski, Dolneni – Boshe Miloseski and Garrison Prilep Commander Col. Zarko Risteski, and the audience was addressed by the President of the soldiers Union from Prilep Blagoja Chonoski, fighter participating in the February expedition in 1944.

The pleasant atmosphere of friendship took care of members of the Company 3.logistic company, 2.logistic battalion wich to all participants of the event prepared and distributed hot tea and Army lunch.

With the active participation of these traditional manifestations ARM also expressed respect for activities wich had military and wider social importance in the past.