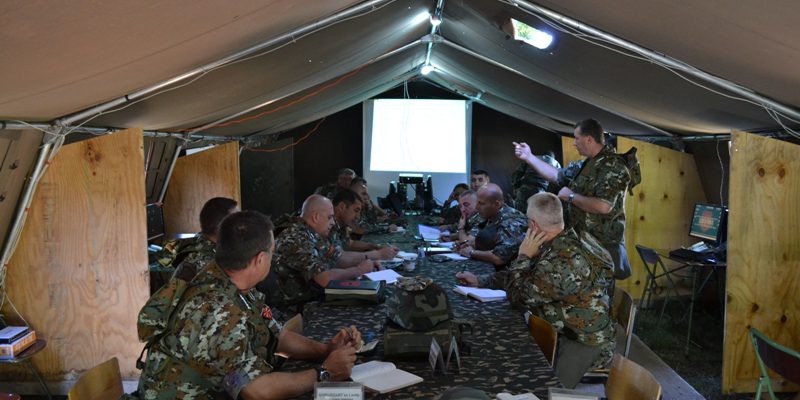 From 23-25 of June 2015, the 1st Mechanized Infantry Brigade Command and Headquarters, together with the subunits’ headquarters personnel conducted an Exercise at the Command Post – “June-2015”.

The exercise had four phases: preparation phase, conducting the exercise, seizing the area within the military barracks, and returning to peacetime locations. The scenario was based on a fictional event without being connected to any other events that has happened or will happen.

At the exercise preparation phase the Command and Headquarters personnel formed a team who made the exercise scenario, the operations concept and worked on the topic “Military Decision Making Process”.

When the exercise started, the Brigade Command brought a decision in an optimal time and wrote the necessary combat orders. The units were deployed in the operational area in a short time and the exercise command started dealing with the incident. After successfully conducting the operation and making peace, the personnel did the last phase of the exercise which was returning to peace time locations.

After finishing the analysis of the exercise it has been concluded that the aims of the exercise were reached, demonstrating professionalism and readiness of the Brigade Command and headquarters as well as of the subunits’ headquarters. The personnel managed to successfully implement their experience and knowledge gained at various planning conferences and multinational exercises in the NATO countries.