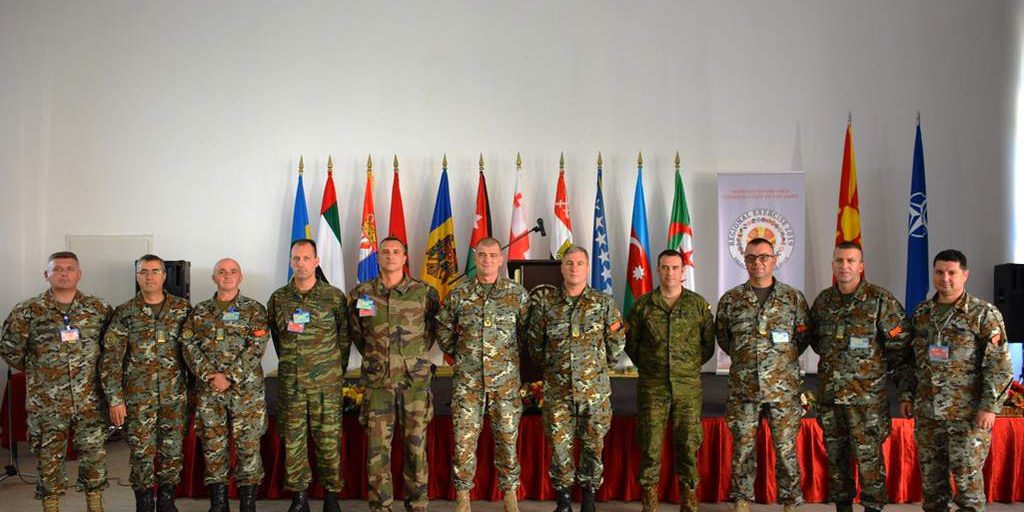 Today, 14.10.2019, at the Simulation Center in the “Alekso Demnievski Bauman” barracks in Veles began the realization of computer assisted tactical exercise “REGEX 19”.

The purpose of this exercise is to mentor and train Army members from the hosts country and the NATO partners in planning, organizing, and carrying out an international exercise at a brigade level in accordance with NATO standards and procedures.

At the opening ceremony of the drill, the director of the exercise, Colonel Zvonko Majstorski, said that during one year of preparations involving seven NATO and six national workshops, significant experience and knowledge were exchanged, thereby enhancing friendship and co-operation between partner – countries. The execution phase, or the realization of the exercise itself, is the crown of this whole process.

The commander of the Joint Operational Command, Major General Pavle Arsoski, said on this occasion that with the responsibility given to him personally to be an officer who will carry out one of the two largest exercises ever performed in our country in 2019 for him is immense honor. General Arsoski, taking into account NATO’s support, emphasized the importance of this exercise as an opportunity for countries to have specific training for their units and bring their capabilities to a level that would successfully respond to current challenges in areas where security, peace and stability in the region and beyond needs to be maintained.

“REGEX 19” exercise is planned to end on 18.10.2019. In this exercise, besides the Army members, members of the armies of 13 NATO partner-countries will participate. In the role of mentors and supervisors of the exercise planning and implementation process, in accordance with the Collective Training and Exercises Directive, are three NATO member states which are part of the Joint Operations Command in Naples.

During the realization of the exercise “REGEX 19”, by practicing the basic tasks and response to incidents, the decision-making process of the Multinational Brigade HQ will be practiced as well, while by implementing the decisions in the Joint Conflict Program and the tactical simulation with the simulation program Joint Conflict and Tactical Simulation Enhancements – JCATS the success of the task will be seen.