Workshop for developing the concept of operations for the exercise: “Macedonian Flash-10” 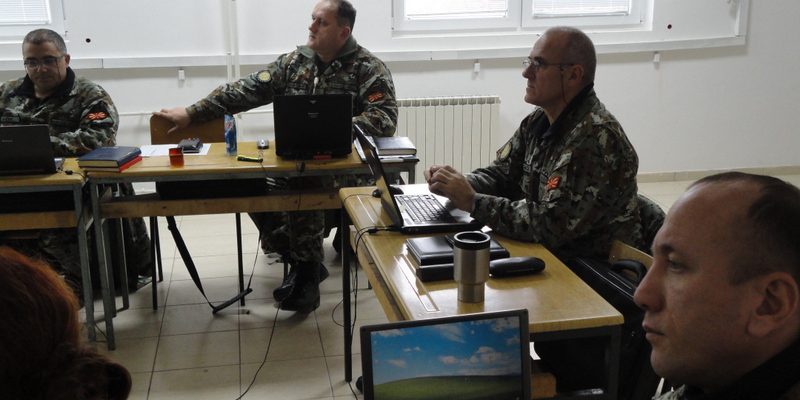 The workshop was opened by the director of the exercise Colonel Djoko Maksimov whos introduction briefing presented the appraisal before the obligations and duties arising from realized Initial Planning Conference. At the end of the brifing, Colonel Maximov marked the beginning of a workshop with given priority for leaders of unions and highlighting the application of previous experiences and lessons learned in the implementation of the contents of the agenda planning exercise consistent with initial Planning Conference.

Commander of the Joint Operations Command, Major General Methodija Velickovski realized working visit of the workshop on which, by the exercise director Colonel Djoko Maksimov and leaders of the unions, was thoroughly familiar with the level of readiness for the execution of the exercise.

The work of the workshop was organized by unions, the working language was English, andall documents provided were produced with the CONOPS – design (review of strategic documents of strategic initiation (Resolution of the United Nations and a cease – fire agreement), mission analysis, Options for a military response and Decision of the Commander of the Joint Task Force that is in accordance with planning Directive 75-3 Bi-SC.

The activities conducted and conclusions emerging from the end of the working conference represent a good basis for further preparations to start the next phase of the planning and successful implementation of Main Planning Conference, wich will be held in February 2014.

Stages of upcoming planned preparations should be crystallized, flawless and perfect, in order to successfully execute NATO evaluation Level- 2 of the declared units acording the Concept of operational capabilities of NATO (OCC) for the upcoming exercise “Macedonian Flash 10” which has a great importance for the ARM overall.