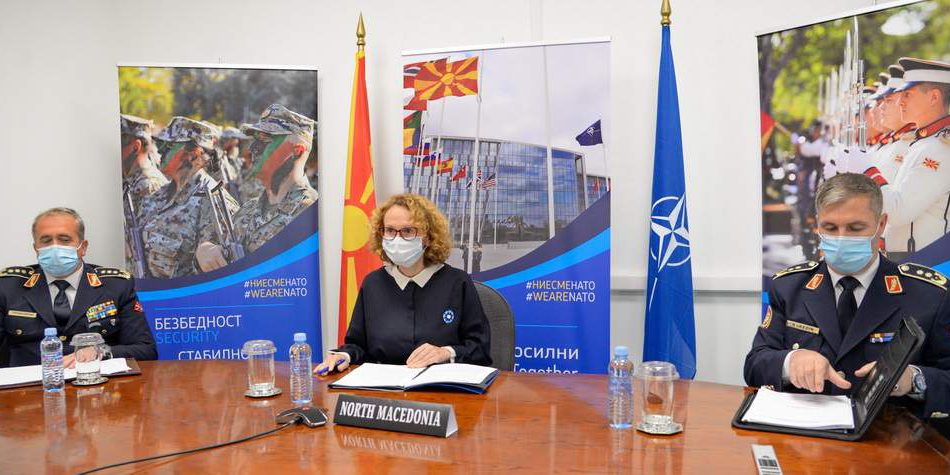 “The Republic of North Macedonia as a full-fledged member state of NATO takes decisive steps for full integration in the structures of the Alliance” said the Minister of Defense, Radmila Shekerinska, who together with the chief of GS, General Vasko Gjurchinovski and his Deputy, General Azim Nuredini participated in the conference.

All processes are in progress – informed the Minister and added that the strategic plans are designed, the plan for stabile budgeting of the defense and increasing the funds up to 2 percent of the GDP until 2024 is being implemented, as well as the important purchases of new and modern equipment.

“In relation to the capacities, after 11 years of stagnation, we started a comprehensive process of modernization. We plan to realize 22 projects till 2028 by which we will replace the old armament with new and modern equipment mainly intended for the Light Infantry Combat Group, our declared NATO – capacity”, said the minister.

Shekerinska emphasized that North Macedonia remains together with the allies in the mission in Afghanistan, and our firm striving for regional safety and stability can be seen through the new value of the Macedonian contribution to the KFOR mission in Kosovo – at the moment 44 service men of the Army work within KFOR, and in 2021 we plan to increase that number to 180 servicemen.

In front of the high representatives of the Alliance, General Gjurchinovski emphasized that the General Staff of the Army of the Republic of North Macedonia conducts activities, intensively and in full capacity in order to accomplish the set goals for a full integration in NATO, these activities are conducted within the transformational process of the Army in all areas under the jurisdiction of the Army, which we expect to be completed within the planned period.

During the conference, the accomplishments of the Ministry of Defense and the Army of the Republic of North Macedonia in the functional areas for integration (administration, modernization, equipping, force structure, education, training exercises and evaluation, logistics air space control and Communication and information systems and cyber defense) in order to attain complete integration planned for November 2021.

The conference is a continuation of the process that was implemented by the working group of the Ministry of Defense and the Army for integration and association in NATO at coordinating meetings that took place before the full NATO membership.