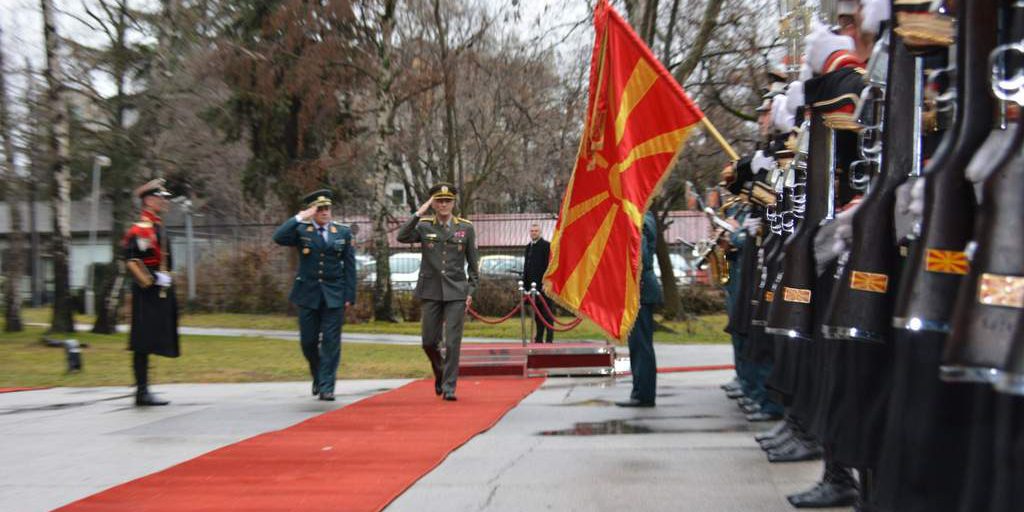 Today a high-level military delegation of the Serbian Armed Forces, led by the Chief of the General Staff, General Milan Mojsilovic, visited the General Staff of the Army during an official visit to the Republic of North Macedonia.

After the reception with high military honors, General Mojsilovic had a meeting with his host, the Chief of the General Staff of the Army, Lieutenant General Vasko Gjurchinovski, followed by official talks with the military staff at the GS.

Our Army’s contribution to NATO, EU and UN missions abroad, opportunities for using the capacities at the ATA ‘Krivolak’ for military exercises, engagement of the Army in support of the MIA in dealing with the migrant crisis were main topics of today’s official talks at the General Staff.

Furthermore, continuation of the existing joint training and the opportunity to use the capacities for training, mainly ATA ’Krivolak’ and the Pilots Training Centre, but also other Training centres in possession of both armies, as well as participation in multilateral partner exercises.

In his address General Gjurchinovski emphasized that we will continue to identify new models for improvement of the bilateral cooperation as an imperative for development of the entire safety environment in the region.

General Mojsilovic expressed his support and respect for our strategic decision for full-fledged NATO integration, which also enhances regional security condition. Among other things, he showed readiness to share the experience the Serbian Armed forces gained while participating in EU and UN led peace-keeping missions.

Bilateral cooperation in the area of defence with the Serbian Armed Forces was mainly focused on military education, taking part in joint military exercises and training, like ‘Platinum Wolf’ held every year in Serbia under the leadership of the US Armed Forces, and military exercise “Balkan Response’, joint participation of the medical personnel in the activities of the Balkan Medical Task Force.

Together with the Serbian Armed Forces we participate in the following joint regional projects: Initiatives B-9 (Balkan Countries Chiefs of Defence Conference), A-5 (the U.S. – Adriatic Charter) – where Serbia participates as observer country, SEEDM (South East Europe Defence Mechanism – cooperation in the area of defence of the South-East European countries) and the initiative Balkan Medical Task Force, and from June this year it will take over command.

In the course of the day the delegation of the Serbian Armed Forces will visit and see the opportunities of the Pilot Training Centre.

As part of the two day visit, the President of the Republic of North Macedonia, and Supreme Commander of the Army Stevo Pendarovski will receive the delegation tomorrow.