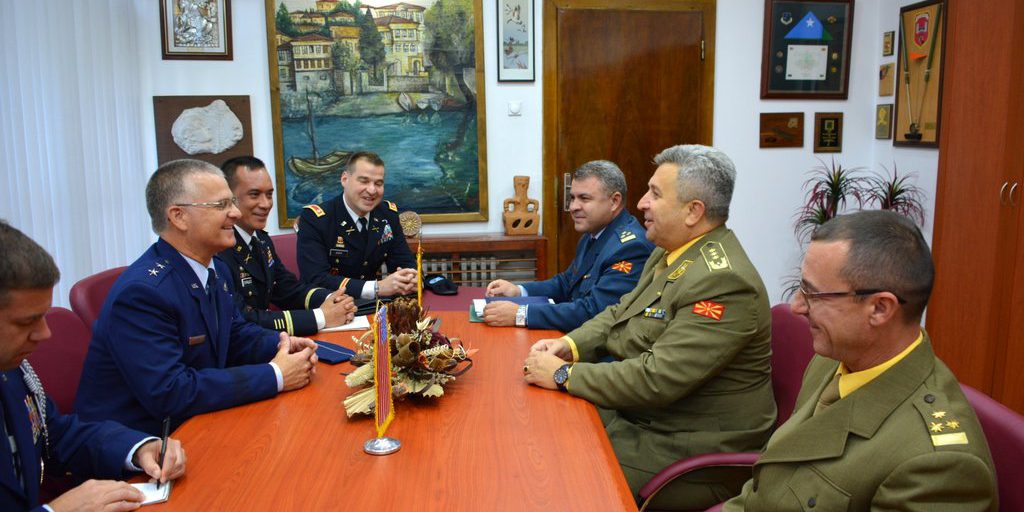 The Chief of General Staff of ARM, Lieutenant General Metodija Velichkovski, received a senior military delegation from the Vermont National Guard, led by its commander, Major General Steven A. Cray, starting their official visit to the Republic of Macedonia.

At the reception the two Generals, Velichkovski and Cray, emphasized the importance of the excellent military cooperation between the ARM and the Vermont National Guard, confirmed by hitherto joint participation in peace operations, realization of many joint exercises, and continuous training and education of members of both armies.

Following the reception at the ARM GS, a meeting was held at the Ministry of Defense with the Defense Minister, Radmila Shekerinska, which was also attended by the US Ambassador to Republic of Macedonia, Jess Baily.

At the meeting, both parties expressed their enormous satisfaction with the genuine partnership which has been existing for 22 years. Since 1995, more than 850 activities have been completed giving the opportunity to more than 4,500 members of the MoD and the ARM to learn about the working standards, tactics and techniques of the Vermont National Guard, the US Armed Forces and NATO standards.

In his speech, General Cray pointed out that out of 70 existing partnerships of US National Guard in the world, the partnership between the Vermont National Guard and the ARM is one of the most successful examples of cooperation. The Defense Minister, Shekerinska emphasized that Macedonia relies on its strategic partners, especially now when we are sincerely and rapidly working towards NATO membership.

In the course of the day, the Vermont National Guard delegation is to visit the Ministry of Interior Affairs, as well as the Crisis Management Centre, where they are going to be informed about the organization in dealing with crisis, management of personnel and resources, as well as coordination with other government institutions.

During their visit, the Vermont National Guard delegation representatives are going to visit some ARM units, where they will be informed on the resources and capacities of the units, and the activities carried out by these units.