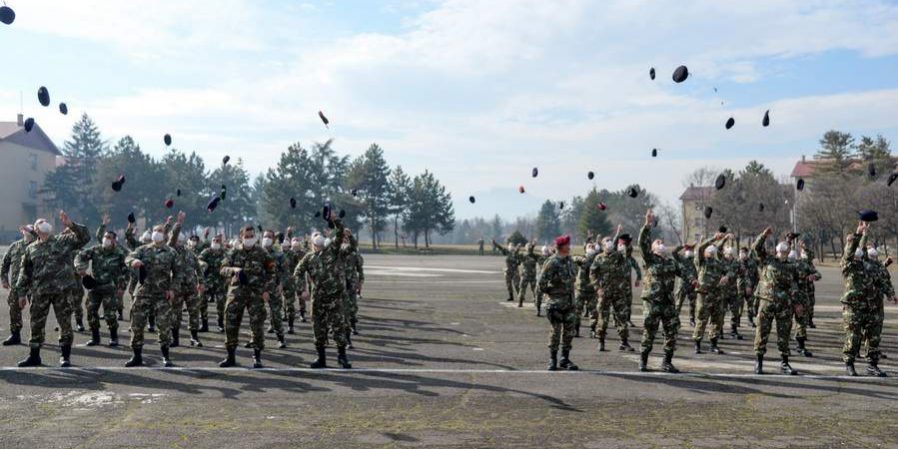 Members of the Army of Republic of North Macedonia, who successfully completed the 3-month basic NCO course, were officially promoted to junior NCO rank during a military ceremony held at military barracks ‘Ilinden’ in Skopje.

The induction ceremony of the first group of 65 NCOs was attended by: the Defense Minister Radmila Shekerinska, Deputy Chief of Staff, Major General Azim Nuredin, Deputy Minister of Defense Bashkim Hasani, as well as Generals, commanders and Sergeant Majors of the commands and units of the Army.

The Deputy Chief of Staff, Major General Azim Nuredin, congratulating, as he reffered ‘the first generation of Army members justly called first generation of NATO NCOs’ on the succesfull completion of the course, he mentioned the efforts of the Army leadership along with the Ministry of Defence for acknowledging the importance of this necessary segment for the operation of the Army, especially in the area of training.

Stressing that despite limitations imposed by the COVID-19 pandemic, the NCO course was successfully carried out, he said he expected them to fully and dedicatedly implement the efforts, results achieved and above all lessons learned in their units, and represent the Army and our country at their best, worthy of a NATO Army member.

The Minister of Defence, Radmila Shekerinska, congratulated the new NCOs for the successful completion of the training. She emphasized the role of the NCO corps in the Army. “ You are the pillars of the Army, leaders and trainers of professional soldiers. Give example while carrying out tasks. Your service will significantly influence the development of the Army”.

In her address, the Minister of Defense expressed her satisfaction with the start of filling the 500 vacant positions for the NCO corps; and she stated that as a minister she will devote to have this repeated every year in order to completely renew the Army NCO corps.

At the ceremony, the course atendees were given certificats for successful completion of the course. The NCOs Nikolche Stojanovski, Viktor Efremov and Todor Jankulovski, who achieved best results on the training were named best ranked course attendees.

The best ranked NCO, Nikolche Stojanovski spoke on behaf of all newly promoted NCOs and pointed out that as NCOs trained under NATO standards they will be the driving force of the Army and will stand equal shoulder to shoulder with their colleagues from allied NATO Armies.

Next group of 55 candidates wil begin their training at the end of February, which will last until the end of April. The training will be conducted by instructors from the Training and Doctrine Command, the Special Operations Regiment and reconnaissance – intelligence battalion.