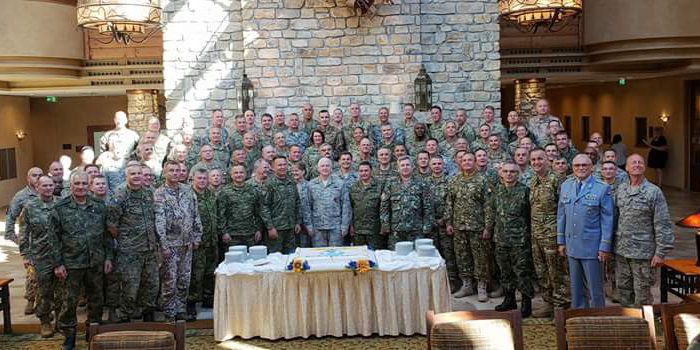 Today, the Chief of the ARM General Staff, Lieutenant General Metodija Velichkovski, is participating at the annual US National Guard State Partnership Program conference with the partner armies, which is held in Garmisch-Partenkirchen, Germany.

The topic of the conference is “Exploiting the Capacities of the US Partnership Program in the region”, and it is attended by EUCOM senior military leaders of the US Army and Air Force National Guards from 22 states of the USA and from General Staffs of European partner nations.

Among the topics which were discussed at the conference were also the achieved results from the partnership program and further plans for developing mutual partnership after the NATO Summit in July in terms of enhancing military capacities and interoperability.

At the conference, General Velichkovski had several meetings with EUCOM senior military leaders, US National Guard Commanders and Chiefs of GSs of the partner nations, and other participants at the conference. In addition, promoting further military cooperation was discussed at these meetings.

ARM Command Sergeant Major Sveto Cvetkovski, is also participating at the conference on the special program for Sergeant Majors of the Armies.

The US NG State Partnership Program with the armies of countries in EUCOM area of responsibility, started in 1993, when the ARM initially began the military cooperation with the US National Guard of Vermont, making it one of eleven oldest partnerships in this program. Kosovo in 2011 with the NG of Iowa, and Montenegro in 2006 with the NG of Main, are one of the last military cooperation agreements of this program.

ARM has had a rich and beneficial joint cooperation with Vermont NG for nearly 25 years with numerous joint activities, of which the most outstanding one was joint mission ISAF in Afghanistan in 2007.