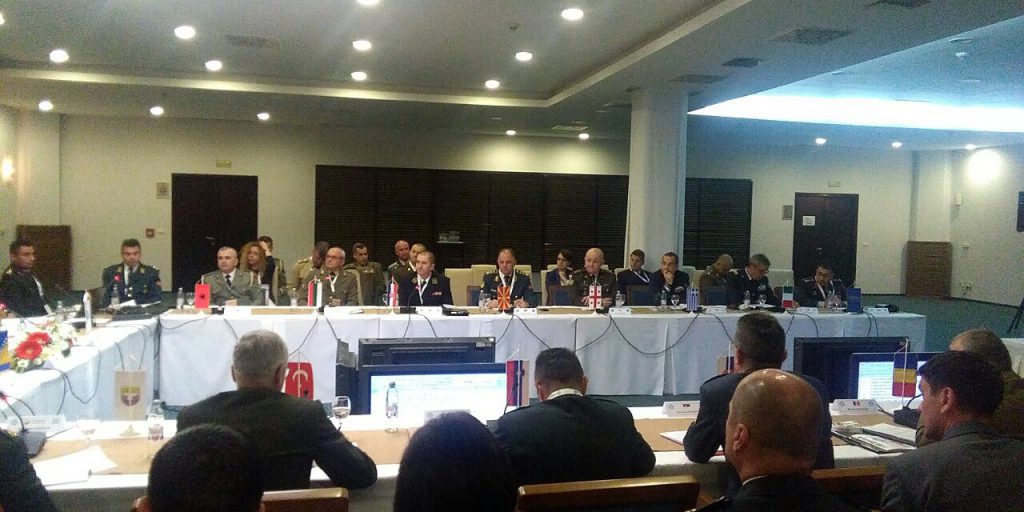 The Deputy Chief of General Staff (DCGS) of ARM, Major General Muhamet Racaj from 8th to 10th June, in Sarajevo, Bosnia and Herzegovina, attended the annual meeting of the Deputy Chiefs of General Staff, which is part of the cooperation of the Ministries of Defence of South-Eastern Europe (SEDM). The aim of SEDM is improving the political and military cooperation in the region in order to enhance the stability and safety in Southeastern Europe.

The Deputy Chiefs of General Staff of SEDM nation members and representatives from the international organizations talked about issues of mutual interest. They condemned all recent terrorists’ attacks, which happened in different parts of the world, emphasizing the need of an organized and joint response in the fight against terrorism and extremist activities, which pose a threat to the international peace and security. At the same time they greeted the effort and contribution of the countries, which are dealing with the massive immigration crisis.

At the meeting the participants exchanged information about the achievements so far, especially in regard to the activities of the South- Eastern Europe Brigade (SEEBRIG) which has proven to be an efficient system and a platform for cooperation of the member countries, and has been actively contributing all these past years for the security and cooperation of SEDM process, especially in terms of SEEBRIG`s involvement in various activities, trainings and operations.

DCGS of ARM, in his address, noted that the Republic of Macedonia as a member of SEDM process had taken part in different regional initiatives, which confirm its dedication to building firm regional cooperation, by giving our contribution towards permanent stability of the region and its complete integration in Euro-Atlantic structures.

General Racaj emphasized that all countries from Southeastern Europe faced similar security challenges and they should be handled through joint and efficient activities. Thus, the development of the SEDM Strategic Overview would help in identifying the guidelines for efficient activities within the process and the complexity of the modern security challenges would be dealt with accordingly. He also said that the Army of the Republic of Macedonia remained consistent to its participation in SEEBRIG, as a strong regional capacity and a part of this process, as well as the participation in the peace operations led by NATO, EU and UN.

During the meeting General Racaj had bilateral meetings and exchanged experiences with his colleagues from the armies of Bosnia and Herzegovina and Montenegro, who also took part in the conference.

General Gjurchinovski participates in the 25th US – Adriatic Charter (A5) Chiefs of Defence Conference
22.09.2022