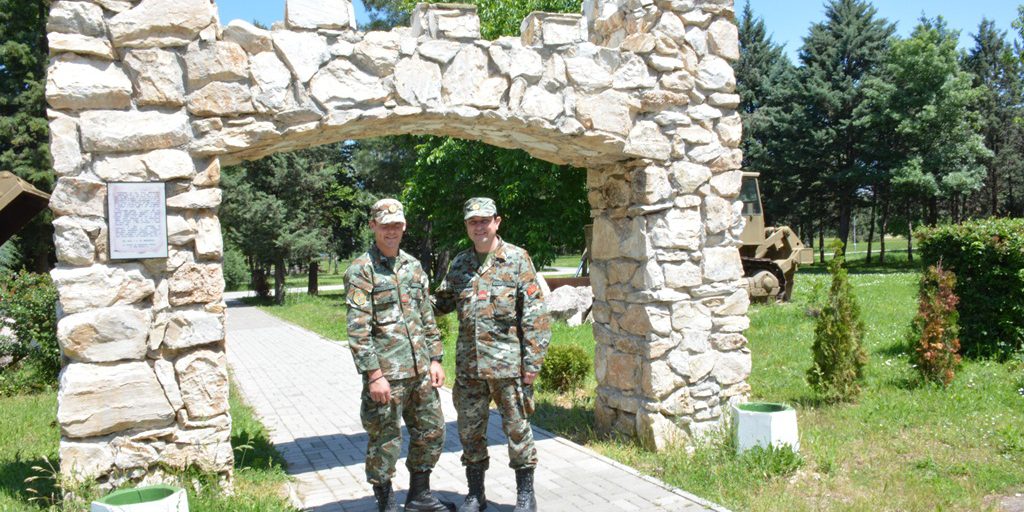 Cases of service in the army of two or more members of a close family at the same time are recorded in the history in all armies in the world.

Likewise, in the Macedonian history starting from the ancient times throughout the Ilinden period to the period of the Second World War there were many known cases of fathers and sons, or brothers serving in the army, and in the period of the Balkan Wars there were common cases of all male members of families forced to serve, usually, on different sides.

Even in the recent history there were cases of simultaneous service of father and son or brothers in the Army of the Republic of Macedonia, however, a real global rarity is a parent and a child to serve simultaneously as professional soldiers.

The Army of the Republic of Macedonia literary is the second home to the ARM servicemen, Junior Sergeant Jakovchevski Dushko and Lance Corporal Jakovchevski Velko. After spending family time, they spend the day completing their duties in the Engineers Battalion and in the Signals Battalion which are stationed in barracks Ilinden. The unusual nature of cases like this puts this story on the first place as a beginning of amusing and successful stories of the ARM servicemen.

During the meeting at barracks Ilinden, both soldiers were surprised when they met in front of the building of the Engineers Battalion Command. The surprise was even greater for the servicemen of their units who didn’t know that they were father and son.

After the official salute to each other, side by side they expected to be assigned their duty, but after explaining that their story was heard in the GS of ARM, and that we would like to share it, they told us their story in a more relaxed atmosphere.

First to speak was the Junior Sergeant Jakovchevski Dushko, in accordance with rank and age. From his answers, we found out that Dushko (41) has been in service in the ARM since 1994 when he started in the infantry unit of ARM, continuing his service in the engineers.  After completing his duties he followed the transformations of this unit through the Engineers Regiment till the current Engineers Battalion in the First Mechanized Infantry Brigade.

Later we asked Jakovchevski Velko (20), who orderly followed the conversation with his father, when he started the service in ARM and what was the motive that made him follow his father’s footsteps.

With no hesitation Velko started his story with the most amusing moments for him since his early childhood when he put the soldier hat on his head and when he put on his father’s camouflage shirt which then touched his feet but with time it became perfect fit. Afterwards he decided to wear his own uniform as a serviceman of ARM.

Brave Macedonian women for whom the Army is a guarantee of peace and security of the state
08.03.2022