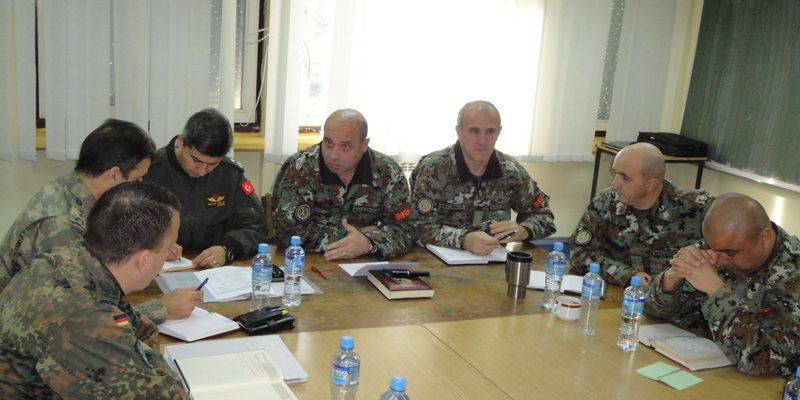 As part of the planning process for the upcoming exercise “Macedonian Flash 10” which will be implemented in the first half of April at ATA “Krivolak” in training center” Pepelishte” within 10.02. to 14.02.2014 was held the Main Planning Conference (MPC) for the exercise.

The exercise is in accordance with an annual activity plan of GS, which activity is under flagship of the JOC and 1.mehanized Infantry Brigade. The aim is NATO Evaluation Level-2 of declared units according the concept of operational capabilities of NATO (OCC).

The importance of the upcoming activity and the fact that throughout the planned activities of MPC are implemented visit of NATO advisory assessment of level 2 for declared units by the representatives of the Supreme Headquarters Allied Powers Europe (SHAPE) from 10-14.02.2014, and a visit by Deputy Commander Joint Operations Command Brigadier Gen.Ass.Dr. Muhamet Racaj and the representatives from General Staff.
The visitors were briefed on the possibilities of ATA Krivolak, security briefing, briefing for specification and plan of the exercise, the exercise scenario, structure and status of the Medium Infantry Battalion Group (MIBG) and light maneuver Hospital (LMB) and the main list of events and incidents (MEL / MIL).

On 12.02.2014, the main participants of Planning Conference and NATO advisory conducted a reconnaissance of the capacity to accommodate staff during the exercise, area for exercise activities and place to present distignushed visitores day.

During the five-day of work on the conference working language was English, and thus were produced all documents provided by SOP NATO and in accordance with Planning Directive 75-3 Bi-SC for the planning phase
The activities conducted and conclusions emerging from the end of the working conference represent a good basis for further work and individual preparations to start the next phase of the planning and successful implementation of the Final Planning Conference for exercise “Macedonian Flash 10”.