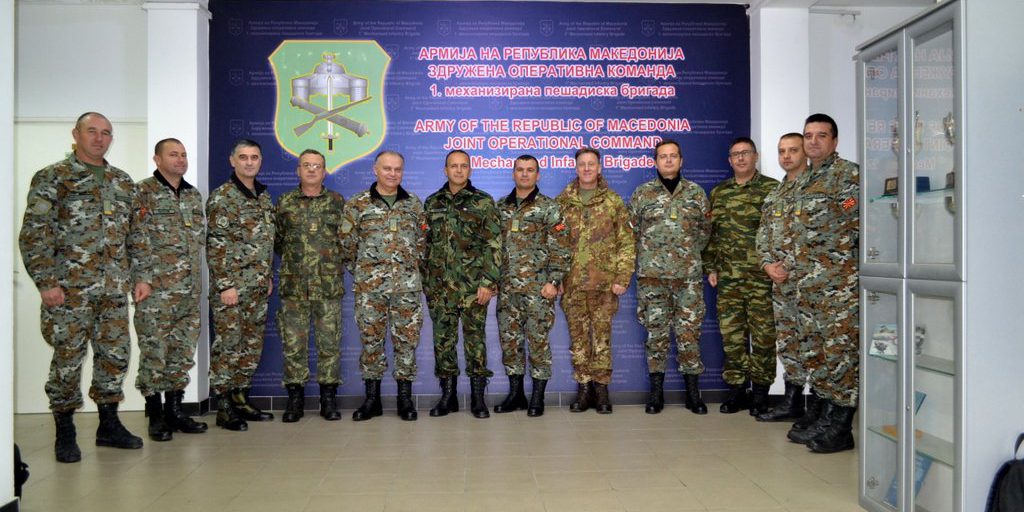 Today, the NATO Advisory Team in the Republic of Macedonia visited the command of the 1st Mechanised Infantry Brigade (1st MIBde) at garrison Petrovec. The members of the NATO team were welcomed by the commander 1st MIBde, Brigadier General Mirche Gjorgoski and representatives of the command and staff of the unit.

The members of the NATO team were briefed about the structure, history, location of subordinate units, declared units within the brigade, training and future activities and tasks by the chief of the Section for Operations. After the briefing, there was a discussion about the future transformation of the brigade, long-term plan for development of the brigade, civilian-military cooperation and other issues and activities related to the unit.

Besides the 1st MIBde Command at garrison Petrovec, the NATO Advisory Team also visited the 1st Mechanised Infantry Battalion (1MIB) at the garrison Kumanovo. There, the team members were welcomed by the Commander of the 1st MIB Lieutenant Colonel Stojanche Kostov, who briefed them about the structure, tasks and training of the biggest declared unit of the Army of the Republic of Macedonia, the Light Infantry Battalion Group (LIBG). After the briefing, the members of the NATO Advisory Team had an opportunity to see some of the equipment and weapons of the LIBG at the technical and tactical demonstration organised by the members of the 1st MIB.